Transformers Animated may be the most influential TF franchise since G1. Every new continuity leaves its traces on the whole, but Animated really stuck. 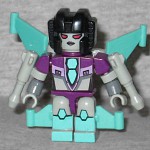 When Starscream built himself an army of clones, they each got a different facet of his personality - the joke with Slipstream was that we don't get to know what she represents, with every fan having their own guess (for instance, the impatience of having to deal with people who are dumber than her). Now Derrick J. Wyatt just agress with any theory he's presented.

"She-Scream" was never named in the cartoon, and since her colors weren't based on any existing Seekers, nobody knew what to call her. The name was made official in 2009's AllSpark Almanac, and yet this Kreon is still called Slipstrike. Huh? Despite there already being Kre-O Seeker wings, she gets separate wings that clip onto hinges on her back. She has the same black helmet and gray null cannons, but her chest tampographs are clearly shaped like the Animated designs, not the Generation 1 patterns the previous Seekers have all shared to one degree or another.

Since Slipstreamstrike is part of the Micro-Changers line, she can turn into a plane. Well, not "turn into" so much as "lay down and become." All you have to do to switch between modes is change her hat and

point her guns the other direction. The instructions show her with her wings pointed backward, like a sane plane would have, but you can get a more Animated style by leaving them pointed forward. She's still all teal, purple and gray in this mode, so no surprises there.

Slipstrike is part of Series 4, which never really showed up anywhere. But then, a few weeks ago, while looking for toys at Walgreens, I noticed an entire peg stuffed with the things! The bad news is, instead of individualized instructions, every Kreon comes with a large sheet of paper showing instructions for all the Series 4 figures; the worse news is, for some reason the bags didn't have any individualized numbers on the back, so our code list was useless. And let me tell you, the "squeeze" method makes Cyclonus and Slipstream feel almost identical.