This is the latest in a series (of indefinite length and regularity) of blog posts memorializing cancelled toys. Our figure today is NECA's Pacific Rim "Battle at the Docks" Gipsy Danger.

The figure was first seen as a cross-sell on the back of the packaging for Series 6, and was seen in person at SDCC 2015. It was planned to come with handfuls of crushed shipping containers and a rocket punch elbow: 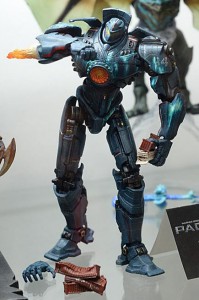 While the figure hasn't been officially cancelled, the fact that NECA is heading more toward "Ultimate" figures than normal series of figures makes it unlikely that he'll ever see the light of day.

This entry was posted in cancelled toys, NECA and tagged Pacific Rim. Bookmark the permalink.

3 Responses to Soon Forget: Battle at the Docks Gipsy Danger