This is the latest in a series (of indefinite length and regularity) of blog posts memorializing cancelled toys. Our figure today is Mattel's Gobbledy Gooker.

If you're unfamiliar with the Gobbledy Gooker, Cracked, Mental Floss and even TV Tropes have complete discussions of him. But really, all you need to know is in this video:

This figure was shown off at SDCC 2011, tucked away in a deep corner of Mattel's booth, alongside a statue showing Randy Orton delivering an RKO to CM Punk, and a statue of Beth Phoenix with Barbie hair and softgoods clothes. Judging by the articulation, it would have been part of the Elite Collection, not the basic series. 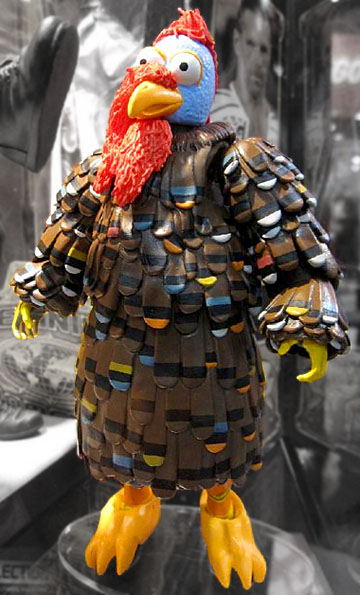 The figure was never scheduled for an official release. Apparently it was "revealed" at SDCC in order to gauge interest, but the result wasn't enough to encourage Mattel to move forward with the idea.