As you know, our reviews all begin with a full-body photo of the toy. And you may even have known that is actually a full-size photo: if a toy is 6" tall, the photo will be 6" tall, and if the toy is 3¾", the photo will be 3¾". That way, you can look at any two photos next to each other, and know how the figures will fit, scale-wise, even if we don't take a single photo of the two together. 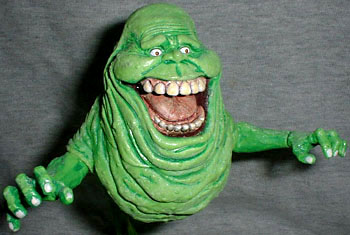 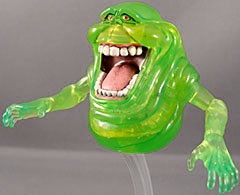 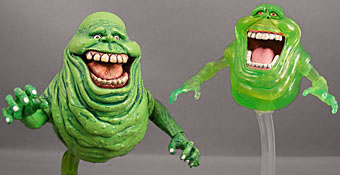 (This isn't 100% true: we're still working through the back catalog, updating the old reviews, and some figures are just too large to photograph that way. But consider it a general guideline.)

There are some exceptions to this, of course. For very small figures, we show them at 200% their real size, but we always make that clear in the alt tags. However, there's one category of figures that ignores all the rules completely, and that's Minimates.

For no clear reason, unless the figure is drastically taller due to construction or accessories, the main Minimate photo is always 235 pixels high. Why 235? No one remembers. It's just the way it's always been done. It shows off the details pretty well, but it doesn't follow our standard guidelines. And there's no clear reason for that. Here, take a look at this photo of a 2" red Minimate and a 3" black Minimate: 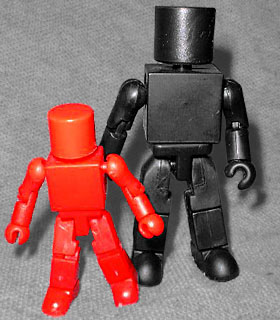 That's the way we'd normally present them: using the red as the guide and making it 235 pixels tall. If there were any details painted on the body, you'd get a decent view of them, but the picture isn't too giant. Still, it's weird that these are a solitary holdout, isn't it? Here's what the same figures would look like at 100%: 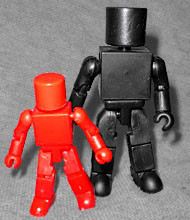 It gives you a clearer idea of how big Minimates are, but any fine details in the paint apps would just get lost, so that wouldn't really work. But here they are at 200%: 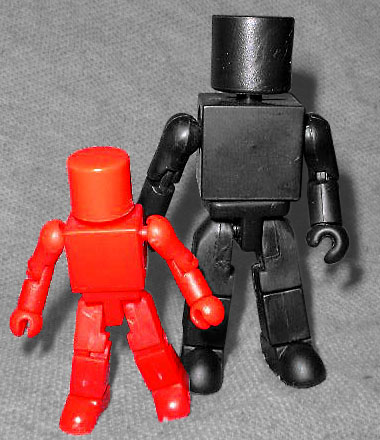 That's really not so bad, is it? It's larger than the old photos, but will show any details, and fits with our standard image practices. So it's settled: starting with our next Minimate review, the photos will be larger. And as time permits, we'll update the old ones just like we do the rest of our reviews. So if you look at a Minimate review and think the image size is weird, now you know why.

This entry was posted in announcements and tagged Minimates. Bookmark the permalink.