Toys R Us, man - what would we do without! All of this comes from a single day's toy run and two different TRU's in the area. 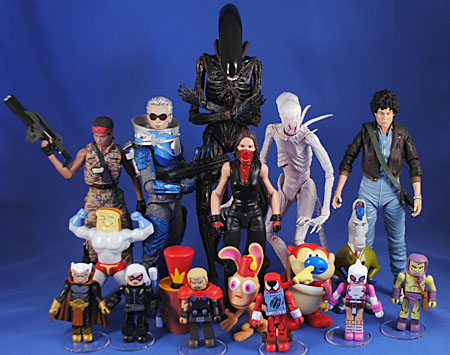 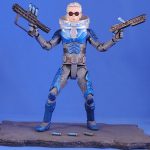 I have a mad lust for Mr. Freeze, so I've been eyeing this figure for awhile at Toys R Us... and finally pulled the trigger. I don't watch Gotham but I recall seeing press photos of this costume and being utterly stunned at how wildly low budget it looked. Shockingly, DST actually turned it into something workable here. I think it's the sculpted crosshatching on the bodysuit that helps it seem less wetsuit-y. And just in general the proportions and aesthetics seem just look better here as a toy. Not great, mind you - it's still an eye-roll of a design - but alright. Plus... the metallic blue armor is an appealing touch. The head is a nice sculpt, but Freeze with hair just seems goofy. He comes fully articulated at all the standard DST point. He comes with two different guns and three tiny, lose-able canisters that neither fit in or on either gun or his armor (despite having tiny holes implying pegs to be present somewhere). As this is the TRU version he gets a big square of asphalt rather than the slightly more elaborate base in the direct market version. The base is nice but it's annoyingly large and frustratingly lacks any pegs - thus it serves no real function. For $15 bucks, though, this is a solid purchase for the Iceheart collection. 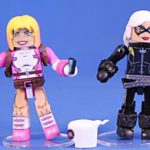 Gwenpool I essentially hate. Spider-Gwen seems like a genuine phenomenon since that is actually a cool costume design, while this reeks of just "slam two popular things together." Apparently some people like her, but... I mean the bio on the back says she's just a cosplayer? How "meta." Woof - and how are those sales doing, Comics Industry? She comes with a sword, a phone and swappable mask and blonde-with-pink-tips hair. And then she's packed with Black Cat as she appears on the CW, apparently. Sure, I get it - her classic outfit doesn't really play these days, but making, what, fake Black Widow while keeping the white hair and bandit mask? Well, folks - this is one of those sets you buy to support the line/as a completist. 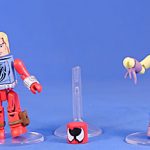 Damn - this is a nice set! I've never been a big fan of Scarlet Spider, but I'll concede that his costume has kinda grown on me recently, and it's captured well here. He's a good mix and nice design and coloring with clever part reuse (like gun holsters for his ankle pouches). He comes with alternate masked and unmasked heads as well as that tired old web and the new hover stand (which is annoyingly JUST too thin in diameter to snugly fit the peghole on the foot. You had ONE job, DST/Factory...). Carrion is the really star here with surprisingly pleasant muted yellows and purples. I think the dangly rags on his wrists are reused too, but maybe all of his tooling is new. I suddenly feel like he came with an alternate head... and I'm panicking cause if he did I don't remember what I did with it... But anyway, the soft red and muted blue, yellow, and purple tones of this set make it really visually appealing! It's another, though better, Scarlet Spider, but also our first ever Carrion! 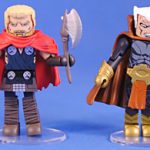 I like this Not-Thor more than Marvel Legends' Not-Thor Thor. He has a few more recognizable elements of the Thor costume and the use of Hope Summers' cloak adds a surprisingly cool uniqueness to him. He comes with an axe and Beta Ray Bill's hammer-axe! The inclusion of that is a surprisingly appealing concept that does actually make me kinda interested in reading about Thor sans Mjolnir. We also get our first ever figure of The Collector! I love getting these obscure older characters from Mnimates and his design works surprisingly well in the Minimate aesthetic. I dig this set a lot more than I expected I would! 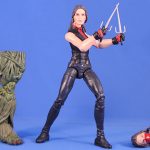 Finally found me an Elektra! She's a great new sculpt that's already gotten a remarkably amount of play for being brand new! The neck-down tooling is also used on Mary Jane from the TRU two-pack and Jessica Jones, too! This is one of, if not THE best likeness yet in Marvel Legends! It doesn't suffer from the weird "digital print" style of paint, though, with her eyes a bit hazy and pixelated - but definitely better than Punisher. She comes with two sais and an alternate head with her mouth and nose covered. I was, of course, tempted to get two... but seeing as her storyline was my least favorite part of Daredevil Season 2... I'm good. (She was cool, but... ninjas? Really? That all fell super flat). 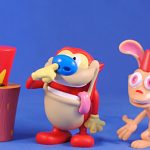 Whoa! I had NO IDEA this even existed! This new company called "Just Play" dumped a bunch of new "classic" Nickelodeon product this week at Toys R Us and I simply had to have this Ren & Stimpy PVC set! The sculpts are all nice and the paint is surprisingly solid for a "new" company. But, really, it's the inclusion of Powdered Toast Man that made this a must have! He's the one big hole in the Palisades line and sorely missed in my collection. Annoyingly he's covered in glitter... which is always something that might sound nice in theory, but is a pain in the ass in practice. He and Mr. Horse also have trouble standing thanks to top-heavy designs and warping in the soft plastic of the legs. Ren, and Stimpy and, of course, Log all stand fine. But for $12.99 - totally worth it! I hope this does well and we get more sets! 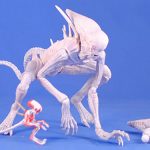 Finally found the Covenant Xeno, so I got that and this Neomorph (kewl name, bro). It's a good sculpt and very well articulated, as we expect from NECA. It can't stand upright on its own, though, which is annoying - but it works so well crouched I wonder if that was their intent for it. Surprisingly it comes with an alternate head and the little newborn version of itself. Really I just got this to be a completist on movie Xenomorphs. It's a weird, uncompelling design with a white coloring that just screams self-conscious design choices. But overall it's a good figure for what it is. 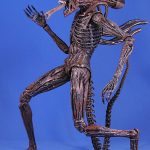 I didn't think Covenant was any good, but at least it wasn't infuriating like Prometheus. But while that movie had an AWFUL script but gorgeous designs, this movie just has an "okay" rating on both. I was really disappointed to find they'd gone CGI for the Xeno in the trailer, but then not surprised to find out they'd filmed with physical costumes only later decided to replace those with CG. This figure "infamously" (is it that infamous, though?) is based on the suit and they changed the design to CG too late to change the figure. Randy at NECA has said there won't a second version of this Xeno to match what's on screen but given that he said they'd never make AvP Predators I'd imagine we'll see another one eventually. After all, it seems like the head and upper torso are the only things that'd need to change. Anyways, it's a good sculpt, loaded with articulation with some nice paint to bring out the details. The actual design isn't that interesting, though, just a standard "different enough" variation. The spindly legs and weird long feet make him a bit tough to keep standing, like all NECA Xenos, so you gotta try to tripod it with the tail. 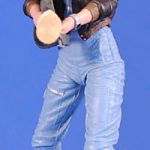 An obligatory but welcome new Ripley from Aliens. Certainly not quite as iconic as the sweaty T-shirt version first released. The blue jumpsuit really could have used a wash or something to give it some... texture, some character. As is, it's just shiny plastic and looks bland and "cheap." The new jacket is nice and she gets double balljointed elbows. She also comes with a Pulse Rifle which is technically new since the tooling has a peghole in the muzzle so that you can connect the all-new muzzle flash. 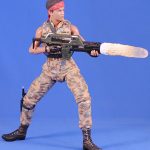 Vasquez is an iconic character and her most iconic look is the pulse-rifle gear, followed by her tank-top look. This though... I don't really recall from the film and am not seeing it pop up in google searches. It is vaguely familiar though... and it's new, and it's Vasquez so I got it. She comes with a knife that fits in her calf-sheath, a handgun that fits in a holster on her chest and a pulse rifle with a removable muzzle flash. I've been hoping for a muzzle flash for the pulse rifle ever since the first series but honestly, this just looks odd. Based on some YouTube clips it seems relatively accurate, but sadly in static, sculpted form has a weird, unnatural, phallic appearance.

This entry was posted in Rustin's Spoils of the Week and tagged Alien, Batman, Daredevil, Deadpool, Spider-Man, Thor. Bookmark the permalink.