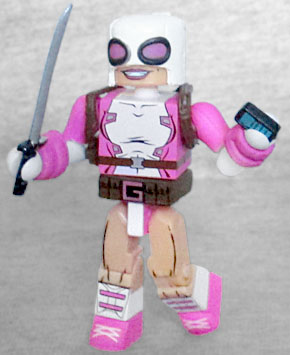 Finding herself in a world where her favorite comic characters are real, Gwendolyn Poole uses her fan-girl knowledge to her benefit as a bounty hunter.

Okay, that's kind of cool - I had no idea who Gwenpool was, other than being a Gwen Stacey-themed Deadpool variant cover riding the Spider-Gwen wave. She basically wears Deadpool's costume, in pink and white rather than red and black, though hers leaves her legs bare because "girl." And she speaks in pink word balloons, rather than Deadpool's yellow. Most of the Minimate's costume elements are just painted, though she does get a belt, harness and glove-bits on her wrists. She's armed with a sword and her cellphone.

Gwenpool's mask is a new piece, because it has a bigger scalp-nipple than any Deadpool mask has had, and it also leaves her mouth exposed so you can see her big, fun-loving smile. And pink goggles, to keep her theme alive. Since she's not bald under her mask, the set includes a new piece of hair, yellow with pink highlights. 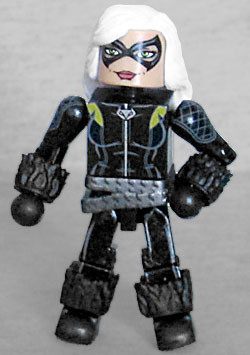 Cat burglar Felicia Hardy was sent to jail by Doctor Octopus when he was in Spider-Man's body. Now she runs her own criminal empire, plotting revenge on Peter Parker.

Hey, what could be better for "Horror Month" than a black cat? Fitting the description above, this is Felicia's modern costume: it loses the white fur that would stand out in the darkness, picking up instead some black fur on the forearms and shins. She's also no longer showing off her cleavage, having finally invested in a shirt big enough to zip closed over her bust - there's a cat's head emblem on her zipper, and two yellow patches on her shoulders that are meant to look like eyes. She wears a segmented silver belt that looks like a tail, and may also function as a whip - never seen that before!

Black Cat's current personality/motivation in the comics is beyond stupid, but she'll be fixed some day. The fact that her face is painted with a smile rather than a scowl makes that day feel closer than ever, but even as a (current) villain, this pairing makes sense: Gwenpool's first adventure involved stealing from Black Cat. Good work by TRU to get them out together!