Today yo reviewed the Marvel Legends Spider-Man: Homecoming Vulture with his Build-A-Figure wings. However, the wings were created incorrectly. Here's a photo that may help you understand what went wrong: 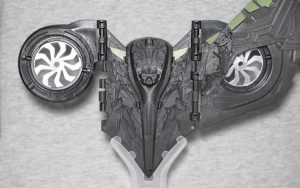 Do you see it yet? Perhaps if we colorize each of the individual pieces: 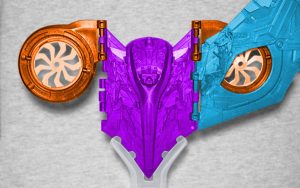 The mid part of the wing has been molded with what is supposed to be part of the turbine! Here's a version that shows how the pieces should have worked: 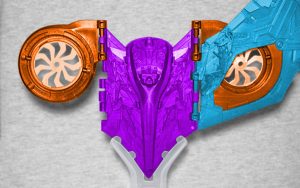 Basically, the turbine section of the BAF is undersized. While it looks fine as long as you have all the pieces aligned, posing it at all will ruin the illusion.

We don't blame sculptor Rob Wiggins for these problems: like he said, there was almost no reference material available to work from because the movie's design was still being revised when the toys had to go into production (and frankly, it doesn't even look the same in every scene in the finished film, either). So a valiant effort was made, but in the end it came up slightly short.