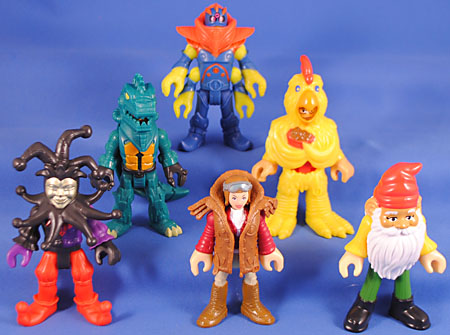 Series 6 of the popular Imaginext Blind Bagged figures bursts forth upon us unsuspecting shoppers with another fun lineup of standalone figures to add to our ever-growing collections! The packaging for this series uses a variety of shades of pink (or fuchsia) as the background color on the top of the package, which is their first foray past yellow on the warm end of the color spectrum so it's a nice, fresh change. The character arrangement on the package is a bit weird, though, with the yellow Chicken Guy in the front overlapping with the yellow bottom of the package while the red-ish Jester and Gnome are in the back overlapping with the pink background. The result is a selection that feels heavy on the red and yellow (indeed the only blue in the series is on the Chicken Guy's pants), so I think they would have been better off swapping the placement of the Gnome and the Chicken - but what're ya gonna do? The back of the package shows a dark pink silhouette of the standard Imaginext figure and of the Jester mask accessory - and best of all Mattel continues to provide codes on the top left corner (above the "i" logo) to clarify the contents of the bag! Some folks/kids really seem to like the mystery of not knowing what they're getting... but I absolutely do not, so I'm very thankful for the codes. I've listed them below with each figure to help you source your characters as well! Speaking of which, lets take a look at the figures themselves! 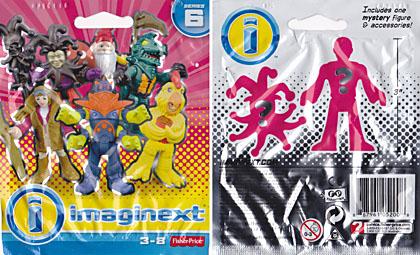 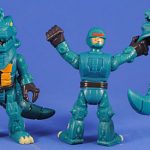 This guy is the undisputed winner of this sixth series and one of the coolest figures in the whole line! It's basically Godzilla, but sculpted as a robot so it's also like a Mecha-Godzilla, and then the head is removable making the whole thing a suit which a person wears just like the Godzilla costumes themselves! The sculpt on this thing is gorgeous - a perfect balance of techno/mech detailing and lizard monster iconography. The accessory is the aforementioned head/mask which has the tail coming off of it, and they even gave the tail a bit of a curve so it's not hidden behind the figure. The paint is minimal but well chosen and well done. I must confess I'm not super crazy about the unmasked head and its red mono-visor, but I can't really imagine displaying this guy without the head and tail on, so it's fine. I really do madly love this figure and would love to see it get rereleased in different colors, metallic looking plastics, and so on! 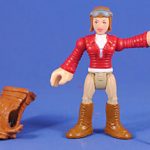 I was tempted to call this figure something like "Female Pilot" or "Lady Aviator" but let's face it - the cultural touchstone is undeniable. Of course this isn't really meant to Amelia Earhart but it definitely honors her and is a very welcome addition to the line and a cool figure outside any potential representation politics (there is only the one female figure out of the six in the series). This sculpt is a nice, detailed aviator outfit with a cool ribbed coat and the pilot "hat" sculpted on. It would have been neat if the "hat" and goggles were part of the removable jacket/vest to offer better alternative looks but it's fine as is. My only real complaint with the figure is the lame propeller accessory. It seems lazy and pointless. A gun or a jet pack/board or anything more action oriented would have been much cooler. I like the bright fuchsia color of her jacket, but again it sort plays into this series as overly "red" in tone. This figure was subsequently rereleased with a biplane in the awesome Mummy theme with her coat painted a much cooler looking dark blue; so we kind of have that option too, plus it helps make these feel like two different "characters" who could be teammates or adversaries! 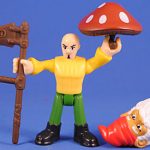 I was really jazzed and tickled when I first saw this figure - it seems like the perfect kind of fun thing for Imaginext to do! Plus, I grew up on reruns of David the Gnome, so I've always had a soft spot for these little guys. Imagine(xt) my surprise, then, when I opened this up to discover a generic "tough guy" head and a grizzly scythe included! What the heck, Mattel! Add to that the overwhelmingly yellow shirt and generally boring outfit and this is a bit of a let-down of a figure. At least he comes with a spot-on perfect gnome head and a super cool and fun toadstool shield! I just wish they'd given him suspenders or something to break up the costume a bit more and a walking stick or carryin' sack instead of a scythe, and maybe an "old guy" head with printed wrinkles or a big smile and some freckles... basically anything to carry through the since of kindness inherent in these kinds of gnomes. 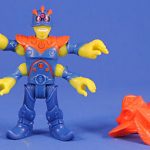 This is a pretty rad figure! I like the four arms, all fully poseable, and the three-finned, three-eyed bucket helmet. The yellow-green skin, blue-purple armor and bright orange highlights & accessory really complement each other well here. The accessory is like a re-breather, or maybe jetpack, which has a pretty cool look to it and covers the guy's mouth while worn, matching the line of the bucket helmet pretty well. It's a rather neat thing and it helps to tell a story and inspire the imagination with this figure. Plus, he seems like he'd fit in well with the aliens from that cool Space series a few years back! 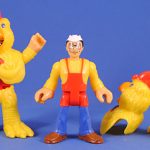 I was pretty excited for this guy too when I first saw the lineup for this series, but kind of like the Gnome, I'm left a little let-down by him. The core figure is a fun little fast food guy, complete with apron and paper hat! He's wearing a Colonel Sanders-esque bow tie, though sadly it's unpainted. He works remarkably well as a figure as-is without the costume accessories! The selling point, though, is his Chicken costume which is composed of a head and torso that slips on over his head plus a waist and legs (which are very reminiscent of Big Bird) that clip on and over his legs. The final effect of wearing both of them, though, is a pretty unconvincing and cheap looking; and it seems pretty far off from what they show on the packaging. There's a pretty big, all things considered, gap between the legs and the chest for no real reason. Maybe it's there to maintain the hip articulation but the result is a weird view of a bright red waist. The head is a fun sculpt but is a pretty shallow relief and soft in detail (compare it to the Godzilla above) so while it's fun that his face is still partially visible through the beak and that he's holding a bucket of fried chicken... the costume's wings don't even cover the figure's hands (they're photoshopped out on the package) so in-costume the bare hands just poke out to the sides. This guy is a really fun idea but a disappointing execution, unfortunately. 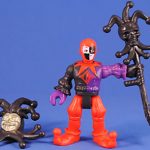 I gotta I'm bummed out by how dark this figure skews - both visually and thematically. The idea of a jester figure is really fun, but the color choices here feel pretty grim. The giant mask is a fairly fun take on a Mardi Gras type of thing, but it does feel a bit too Mardi Gras for me, and the black color isn't that appealing. His other accessory is a weird staff with a giant skull on one end and a scythe blade on the other. Ugh. The result is a figure that feels like something from a Halloween maze or something, and not something very fun, clever or Imaginext-y. Maybe this iconography is significant to Mardi Gras so it makes more sense if you know that culture more, but for me... not so much. The figure is a really nice sculpt, though, and very Jester-y so I'd be more than happy to see this repainted in to more bright, dynamic, medieval colors and rereleased down the road.