Not all heroes wear capes.

Well, technically, almost no Marvel heroes wear capes (Thor, Vision, Sentry... a couple others?), but that's not what we're talking about. No, we're referring to the fact that these Minimates were supposed to be a Toys Я Us series, but were rescued from cancellation by Walgreens. 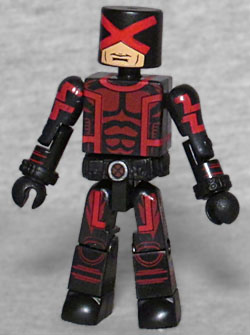 Blamed by his friends for killing Professor X, laser-projecting Cyclops now leads his own team in pursuit of mutant rights.

This Cyclops is in his "my powers are even more out of control now than they have been since I was a teenager" suit, though it gets a lot more detail than the Marvel Legend did. Rather than being solid black with thick red stripes, the Minimate also tampgraphs on a darker red to show the light shining on his chest, plus the ribbed panels on his legs and more detailing on his boots. If you really must have a "plain" version, you can take a cue from Havok and just turn the chest around - the stripes back there are the same pattern, but there are no painted muscles. 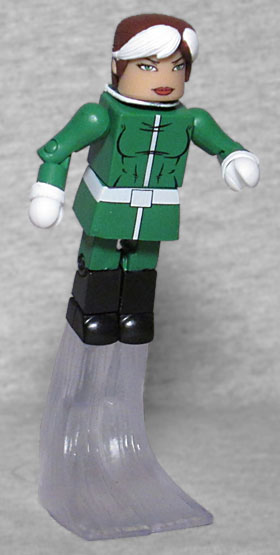 Marvel NOW! is when Rogue joined the Avengers Unity Squad, aka the Uncanny Avengers. She ditched the green-and-yellow bodysuit with the leather jacket in favor of a costume that reflected what she'd worn as a member of the Brotherhood: a green, hooded top, green leggings, and over-high boots. This is what she was wearing during the Axis crossover, if you want to have her fight with those figures. She has a two-footed flight stand, and your choice of hair pieces: one with her hood up (first seen in the "Age of X" box set) and a new one with her hair pulled back into a bun. There's also a "loose hood" piece that can be slipped on her neck for that look.

I might not have purchased this set if it had remained a TRU exclusive - both figures are okay, but not that exciting to me personally. However, knowing that Walgreens yoinked them from oblivion and is offering them in a limited manner got me to buy.