We already looked at the big names and the new hotness, but now it's time for the best Pokémon. 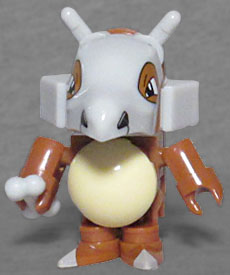 Cubone pines for the mother it will never see again. Seeing a likeness of its mother in the full moon, it cries. The stains on the skull the Pokémon wears are made by the tears it sheds.

Oh god, my feelings! Cubone's working name was "Orphon," because (like Batman) its parents are deeaaaaaad!!! That skull on its head? That once belonged to its mom. There are plenty of fan theories about that, with Kangaskhan and Charizard being major contenders. Its Japanese name is Karakara, the onomatopoeia for clattering - in other words, the sound of bones clacking together.

Cubone is built from 27 pieces, and although its body is built in much the

same way as Pikachu, Squirtle, and Charmander, it gets a differently shaped head; gotta depict those facebones, you know? But on that note, it's weird that the back of the head is tan, not gray - that should be bone too, not skin. The skull is a helmet, not a mask. Ah well. Cubone carries a bone to club its enemies with, and the ridges on his back have been included here in the form of small pegs. The figure has balljoints for the shoulders and head, and swivels that allow you to reposition the hips and ankles. The "ears" get those, too, but they're actually horny bumps on the bone, not something that would be flexible. 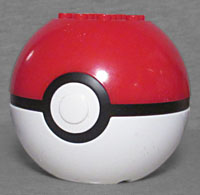 The single-packed Pokemon Mega Construx are cleverly sold inside pokéballs. To help set each series apart on the shelf, the specific style of ball changes. Series 2, of which Cubone is a part, comes in a plain red and white ball, the basic starter one from the games and shows. Series 1 was in the same style, because it hadn't occurred to them yet that changing the ball was a good way to differentiate the toys. Studs on the top and the interior allow you to display your Pokemon, and it can be stored inside without disassembling it.

This entry was posted in blog exclusive review, Mattel and tagged Batman, Pokemon. Bookmark the permalink.