So it seems safe to say the police's heroic last stand was not an unqualified success. 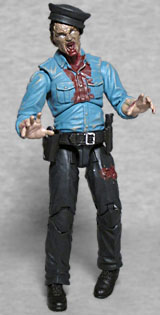 Since this figure is part of Wave 4, and his art card has Chapter 4 of the story on the back, we can piece together that this is not just some random cop who was bitten at an indeterminate time, but rather one of Officer Robin's squadron, who was not lucky enough to make it to Tower 101.

Zombie 004 is wearing his police uniform, meaning he's got the shirt with the unbuttoned collar, but instead of plain pants, he has the ones with a rip in the thigh. Also, the hands capable of holding accessories have been swapped for ones with the fingers splayed wide, ready to grasp and rend flesh. There are bloody red paint apps on the hands and forearms, and blood pouring down his throat and the front of his shirt, and gushing from the cut on his leg.

The head is a new sculpt, and distinctive enough that we won't accidentally assume this is supposed to be an undead Robin: the hairline is different, for one thing. His mouth is wide open, creating an angry look that's simply reinforced by the deep wrinkles on the forehead. And miracle of miracles, there are actually paint apps on the eyes to make them stand out! 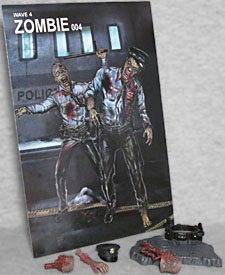 Naturally, the set includes the three standard accessories that all the Zombie Lab zombies have zombied with: a dangling spinal column, a stomach with the guts hanging out, and a loose arm with a bite taken out of it. Not that any of them are very useful for him, what with the shirt and all, but they're what we always get. This time, though, we get a little more, too: since Zombie 004 was once a policeman, he's also given the gun belt and the peaked cap he would have had when he died. The included art card shows two police zombies, one of whom is swinging a nightstick. Which again makes us ask why zombies can't hold things.

Robin was cool as a plain 4" cop figure, and this is cool as a 4" zombie cop.