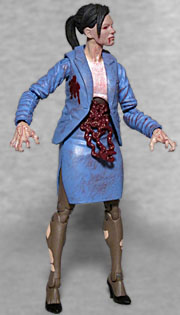 This zombie comes in Wave 4, so the story suggests she may be one of the researchers the police were unable to save. Or possibly another office worker who got caught in the wave of zombies.

Zombie 005 uses a lot of the same pieces as Keanna: the heels, the skirt, the jacket... the only thing different is her shirt; Keanna's was cut low enough to show off the goods, while Undeadsko Aggretsuko was apparently more modest in life. Or had a stricter dress code. The rips in her stockings are a different pattern than Keanna's were, and there are bloody paint apps all over her blue clothes and white shirt.

The figure's head is the same Marian had, but with black hair instead of blonde. That means it's not wounded and not angry, but at least this time they've remembered to paint the eyes: they're bloody red, and there's further blood dripping from the corners of her mouth and, weirdly, on the bridge of her nose. Did somebody punch her? 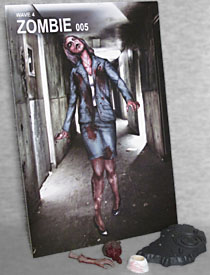 We get the standard zombie accessories: an arm, a stomach with the guts out, and a broken spine. The skintone on the extra abdomens matches her pantyhose rather than her bare skin, which isn't right. On the other hand, the disemboweled stomach works pretty well thanks to the tightness of her coat helping to hide any blatant seam between the bodyparts - that's why we've got it on her up in the main pic. There's the display base, of course, and the art card that shows her shambling down a hall. Although in the art, her hair is down, not pulled into a ponytail.