Welcome back to the Wasteland.

Sentry Bots have been part of the Fallout universe 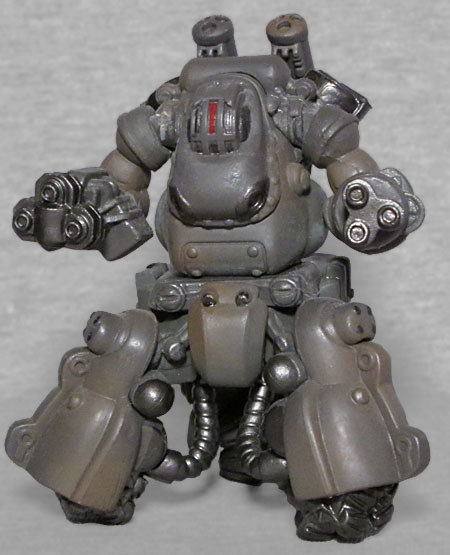 since the second game, but back then they were boxy bipedal things, like an ExoSquad E-frame. They were redesigned for Fallout 3, though this one comes from Fallout 4 - however, it doesn't come from the Fallout 4 Mystery Minis, but from Series 2 of the Fallout Mystery Minis. Yeah, Funko's organization for these things is weird.

Built before the Great War, Sentry Bots were designed for the heaviest firefights. They're about 10 feet tall (a human would come up to about the bottom of the bump on its chest) and have heavy armor, powerful weapons, and high mobility due to their three-legged stance and omni-directional Mechanum wheel feet. 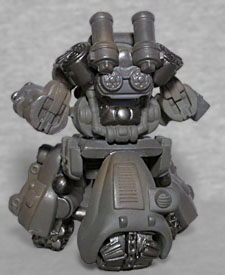 Sentry Bots come in lots of variations, but this one appears to be an Annihilator Mk II, judging by the mortar cannons mounted on the shoulders. Its hands are a Gatling minigun and a three-shot missile launcher. Considering how small the toy is, it's impressive how many small details they're able to cram into the sculpt, like the chains that appear to drive the feet or the cooling fans on its back. The colors are pretty drab - grey and green - but as a military device, that makes sense.

Fallout Mystery Minis Series 2 is evenly packed, meaning all the figures are 1:12. The Sentry Bot is easy to find, since it's bigger and heavier than all the rest.