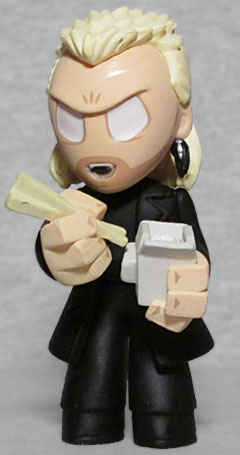 Whenever you're looking for a specific blind-boxed Mystery Mini, there always seems to be some utter loser of a figure that is just perpetually in your way - one that keeps turning up over and over, no matter how much you don't want it. Maybe it's a Count Chocula or an Alien (Queen) or even, yes, a Wolf Man; something that seems to belie its printed ratio and manages to feel even more plentiful than it should be. In the case of Horror Classics Series 2, it was this chump.

I'm... pretty sure I've seen The Lost Boys? At least once? I mean, it's an '80s movie, so who cares, but Netflix probably had it at some point, right? It's mainly known for its hardcore gay sax scenes (that's not a typo) and for the main dude Michael looking 100% like Anakin Skywalker. Also for Kiefer Sutherland eating Chinese food, apparently. That's what this Mystery Mini leads me to believe. 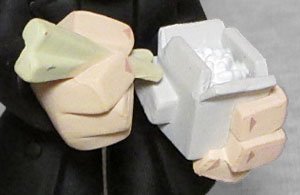 a "likeness," per se (because that's not how Mystery Minis work), but they did sculpt his evil brow and paint his stubble. He's got a spiked punky hairdo and wears a long black coat. [Doesn't that fairly well describe you in high school, yo? --ed.] Rather than doing something cool or dynamic, he's just standing here snacking [again, you in high school, right? --ed.]; the Chinese food carton is in his left hand and the chopsticks are in his right, but a paint app was missed on the left thumb, leaving it the same color as the container, rather than his skin. Whoops!

I'd have been perfectly fine never getting Young Jack Bauer, but I ran into him so dang often that I finally just accepted my fate.