Series 4 of the BotBots may have ditched a lot of things - pictures of the mall, pictures of the bots, instructions - but they're keeping alive the tradition of repainting older toys as new ones. At least we're getting new factions out of it, right? That's how Swapbox 16 can be a member of the Retro Replays!

The name "Swapbox" makes this sound like it should be 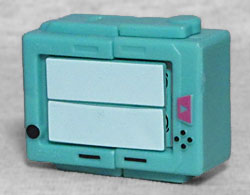 a rental machine, a la Redbox, but that's not the case; it is, instead, a handheld gaming system. So the "16" might be a reference to the TurboGrafx-16, but that was a console, not handheld. And then, the toy's colors - a blue-teal body with a lighter screen - calls to mind Adventure Time's BMO. Unlike D-Pad Chad, Swapbox 16's stock art accurately depicts the unit sideways, instead of vertically: the position of the molded controls (thumb pad on the left, buttons on the right) make the intention clear.

This is one of the more difficult BotBots to convert. You have to rotate up the little ear points, pull out the arms and swing them down, pull out the two sections of the screen (that's the bit that makes things hard) and rotate them out of the way for now, fold down the legs, spin the head around, and move the screen-wings up a bit.

Swapbox 16 has played it all. He knows every cheat code 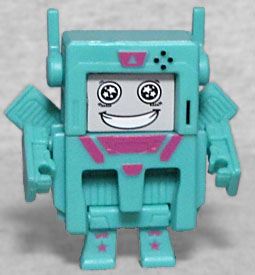 to every level to every game by heart. He's hacked it with all the hackers. Played with all the players. Gamed with all the gamers. It's no wonder he's always 1-upping the competition. This bot has been gaming since he was just Swapbox 2.

Swappy remains mostly teal in this mode, but does get some magenta details on the chest and a gray face with a huge smile and starry eyes - considering that D-Pad was a d-bag, it's nice to see a character who's a gamer and yet not a total tool. The colors on the chest are matched by areas on the forehead and legs, tying the whole piece together. The robot is very boxy, and is articulated at the neck and shoulders.

This BotBot is available blind-packed as #17, in a Movie Moguls 8-pack, or a Wilderness Troop 8-pack.