Hasbro brought a Transformers BotBots exclusive with them to San Diego Comic-Con this past summer: the "Con Crew" set, which features 'bots from three different factions: the memory-recording Meet n' Greets, the time-wasting Line League, and the overly energetic Fantastic Fuelers. Together, they fight crime! Or whatever. 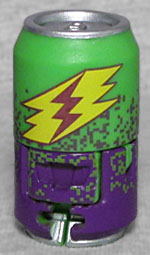 mega-doses of caffeine, the answer is energy drinks. With a taste like sour toilet wine and the runoff from an undercooked piece of chicken, energy drinks are sold in huge cans because while there's a legal limit on the amount of caffeine allowable in a single seriving, there's no limit on the number of servings per container (though just like Oreos, most of us default to "the whole thing"). This mold was first seen in Series 1, as a blue-and-white can clearly inspired by Red Bull, while this one speckle-fades between green and purple, and has a purple lightning bolt logo on jagged yellow near the top of the can. It doesn't seem to mimick any real-world energy drink (at least not a famous one), but it conveys the idea efficiently.

The BotBots are, by design, super simple to convert, and this is no exception - particularly since the process is nearly identical to the coffee cup and the slushie: lift the top, spread the arms, lower the legs. 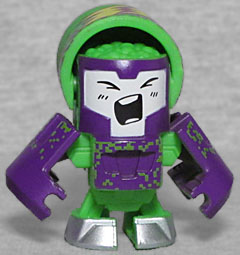 Poor Carb doesn't even get his own text, he's got to share. Which is kind of fitting, since part of the sculpt is reused, too. Maybe not the same literal molds, but compare Carb O'Nate to Sippy Slurps, and you'll see the same indentation shape on the chest, the same kind of hips, and even the same style of shoulders (though slightly retooled to make them work better here). Carb's body is straighter (because can vs. cup), but it's very, very similar. The face is probably meant to look like a wild, exuberant yell, but it ends up looking like he's yawning. One of the coolest features is that the top of the head is sculpted to look like a pile of bubbles - it's like we're actually seeing the horrible drink inside! 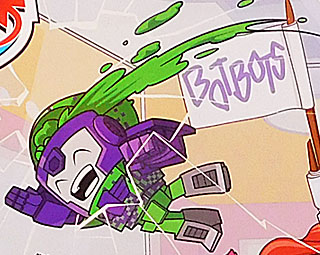 Series 1's NR Jeez was a better take on this idea, because it referenced a real item, but the green and purple colorscheme here is pretty appealing in its own right.