Remember the days when a mall would have a dedicated toystore? Heck, remember the days when toystores were even a thing at all, whether in a mall or not? Now all we've got are EdUcAtIoNaL sToReS selling puzzles and PVCs and artisanal wooden whatnots. Oh well, so it goes. We can content ourselves with the knowledge that the Transformers BotBots mall has two such places. And just like the KB Toys of yore, they'll apparently leave some things just sitting out in the entryway - unless the Playroom Posse wandered out there on their own. 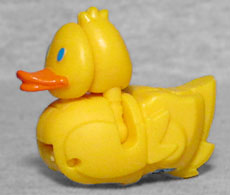 Rubber ducks first appeared in the 19th century, after Charles Goodyear found a way to stabilize rubber (before vulcanization, rubber would melt in the summer and crack in the winter). They were originally solid chew toys, and it was several decades before they became hollow bath toys. Today they're even in the Toy Hall of Fame! This one looks fairly realistic, as far as rubber duckies go, with shapes representing the feathers on his head, wings, and tail. He has blue dot eyes and an orange beak.

BotBots convert easily, so all you need to do for Quackules is lower the legs, split the back of the head to become arms, raise the face up against the chest, and turn the back end around to reveal the face. Simple and quick!

Quackules may be ridiculously brave, but he's no quack. In fact, 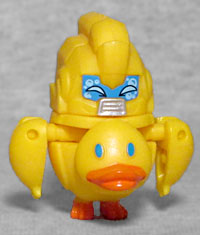 he considers himself something of a deep-sea explorer. Unfortunately, he's never actually seen the ocean, but that doesn't stop him from exploring the murky depths of a sink, or the bottom of a watery bucket.

Aww, how cute! Having a duck face on his chest does make it hard to get Quackules to stand, because you have to find the perfect balance point on those tiny orange tootsies. The body remains a bright yellow in this mode, of course, but the blue around his eyes manages to look like a dive mask, fitting with his bio! Neat! The head swivels and the arms are on balljoints, but it's unclear what advantage there is to putting the duck face on a balljoint instead of simply a hinge. 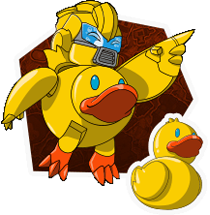 Quackules is available either blind-packed, in a Playroom Posse 5-pack, or a Fresh Squeezes 8-pack. If you're trying to get the complete Series 3, you'll probably end up getting both those, meaning twice the ducky fun!