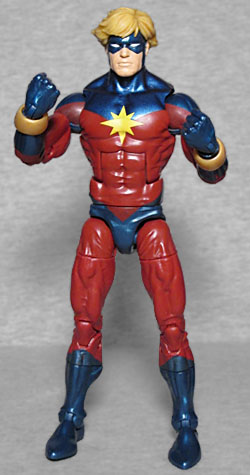 The powers of flight, superhuman strength and stamina make Mar-Vell a celebrated warrior.

"Made." They made Mar-Vell a celebrated warrior. He died. And really, how "celebrated" could he be if the major accomplishment in his entire superhero career was "accidentally got cancer and died"? He was such a nothing character that a writer went to their editors and said "I want to do a book where the guy who literally carries the name of our company gets a sad disease, wastes away depressingly, then really dies a permanent death he won't be coming back from" and the editor was like "yes, let's do that, I can see no downside at all." Congratulations, Mar-Vell, the only thing important about you was your name.

which is just fun to say. The colors are nice and dark, with the blue parts of his costume being slightly metallic and the red flat. His Nega Bands are separate pieces, so if you pop the toy's hands off, you could share them with different characters. The fact that they and the star on his chest are two different shades of yellow is slightly distracting. His head is new, because no one else had that shaggy 1970s hairstyle.

Captain Marvel is part of the Avengers "Gamerverse" ML series, so he includes a piece of the videogame version of Abomination. The right arm. It's a totally new mold, with scaly skin and spikes growing from the elbow and shoulder.

The release of Mar-Vell makes me retroactively angry that I got ToyBiz's version back in the day, rather than the Genis-Vell variant. Because nobody needs two Marvs, and this one is way better than the 2006 figure.