Although "Dinsey" is almost synonymous with "princesses" today, the fact that the official group of them jumps from 1959's Sleeping Beauty to 1989's Little Mermaid tells you just how long the company went without worrying about fairy tales

as the main source for their stories. Like Cinderella, her movie was a gamble to save the studio from bankruptcy (or at least obscurity, though The Great Mouse Detective had already done a lot of the heavy lifting on both those fronts by that point) - the fact that she's the one who's credited with starting "the Disney Renaissance" should tell you that it worked. A big part of the success is the intrinsic queerness of Howard Ashman's score, which is heartfelt, sincere, and spoke to everyone.

Mark Henn had worked as an animator on The Little Mermaid, and was also on the Wreck-It Ralph team, so Ariel was the first Princess to get revisited as a test to prove the idea could work. As is usual in the "Princess" line, she's in her human form, not half-fish, though her clothes do reflect the mermaid colors more than any of the dresses she had on land: she's got shiny green shorts, to match her tail (which was an original color, called "Ariel," created especially for the 1989 film), while her shirt is the periwinkle color of her seashell bra. While Cory Loftis created several different options for graphics on the shirt, the final version is just a list of her made-up words - Gizmos & Whooz-Its & Whats-Its & Snarfblats & Dinglehoppers - referencing the famous Experimental Jetset design. 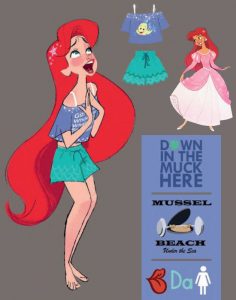 All the Comfy Princesses have the same joints: balljointed head, swivel/hinge shoulders and elbows, swivel/hinge hips, and knees that are ratchet joints inside a rubber sleeve, making the legs seamless. Rubber ankles mean they're very hard to stand, though. Ariel gets it extra rough because of the way she's packaged: they have her kneeling behind the bench, so her feet get splayed out, and her hands are rubberbanded up by her chin. Poor girl! The hair is rooted, and shaped to match the style seen in the film; getting the "flow" right was part of the proof of concept, so a few strands here seem to have been waxed to make them stiffer and give them shape.