Back in 2001, when DST was looking to defray the cost of 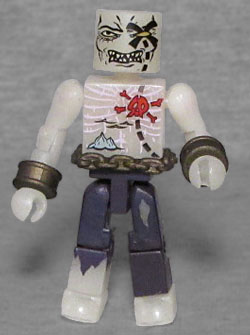 tooling their pirate ship, they released the same mold in different colors with different pack-in figures. The third version was a ghost ship, cast entirely from glow-in-the-dark plastic and manned by a character called the Undead Cartographer. He'd already gotten a sneak preview release a few months prior, however, as a freebie figure in a Minimates Collector's Case. The one with the boat was solid colors, while the one with the carrying case was GitD himself.

If we had to guess (and we do, since there's no biographical information for either edition), the Undead Cartographer is probably on Charles Vanes' side in this story - he's the one with ghosts and zombies on his team, not Jack. The Cartographer has a dried, desiccated body, sharp crooked teeth, thick cuffs on his wrists, a chain belt, and tattered pants.

Even the most well-protected parchment would eventually degrade when

exposed to salt water, so the Undead Cartographer has a different way of protecting his most precious map: it's tattooed on his body. Now, was that his choice, or was it something done to him? Is he back from the dead because he wanted it, or because Vanes had need of him? His back has a palm tree and a treasure chest, then a dotted line curving down toward the side of his waist; on the chest, the line comes back up, past an island and waves on his stomach, under the red skull and crossbones over his heart, then up onto his face before terminating at the black X over his yellow eye.

Both versions of the Undead Cartographer are cool, but the waxy color of the glow-in-the-dark plastic - plus the obvious fact that he glows in the dark - makes the one from the carrying case just a bit better.