The Peter Parker figure we reviewed today isn't the only Retro Collection release to be inspired by a figure from Series 2 of the 1994 animated Spider-Man line. The rest of the lineup for that series was Kraven, Vulture, Alien Spider Slayer, Web Parachute Spider-Man, the Lizard... and Kingpin. 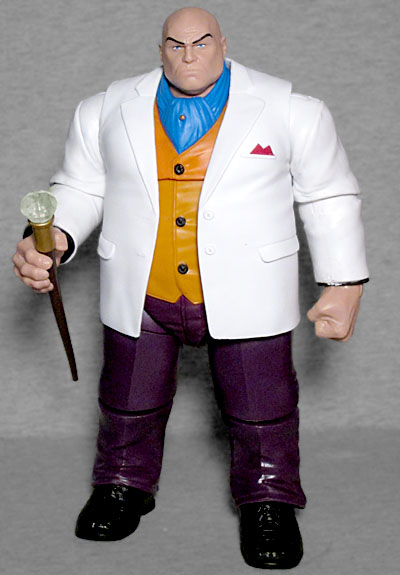 This is, of course, the Build-A-Figure 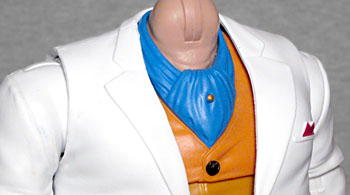 with new paint. His coat is still white (though his pocket square is now red instead of purple), but the rest of his clothes have been repainted to more accurately match what he wears in the comics: purple pants, a yellow vest with black buttons, and a big blue ascot. You'll notice that's something new: the BAF had a necktie, while this one does not. It seems to be a new piece that's glued over the existing mold, rather than a completely new chest tooling, and it looks perfect.

Kingpin still has his diamond-topped cane, and still has two heads: one calm, one angry. To add even a little more value to the release, the angry head has a few cuts and abrasions, and a black eye on the left side - you can assume he's been brawling with Daredevil or something. The paint changes give a little more personality to what was already a really cool sculpt.

If the Build-A-Figure was the only Kingpin available, he'd have been a perfectly fine representation of the character. A very good one, in fact. But with the release of this Chungus, that BAF body is now free to be Shadow King forever, while this one gets to worry about the street-level heroes nosing in on his business.