Injected with an experimental Super-Soldier Serum, Steve Rogers has the peak potential of strength, endurance, and dexterity.

That he may have, but in the crummy Marvel's AAAvengers videogame, you still have to level him all the way up before you can unlock what should be his basic attack, "throwing his shield." I mean, it's right there in the themesong.

Someone referred to this as "Blue Lives Matter Captain America," and now it's all I can see. It's the game's version of his stealth suit, a palette swap of the normal costume with darker colors, but all it looks like today is a SWAT cosplayer. The only thing it's missing is some tape to cover up the name and badge number, like a total coward. The game's uniform already looked like individual bits of modern tactical armor rather than a cohesive suit, so making it even darker does away with any lingering connection to Captain America or his ideals. He's no longer defending America, he's defending Starbucks windows.

The mold of this figure is the same as the Series 1 figure. I never got that, because it didn't look great and I wasn't thrilled by the Abomination BAF, so this is new to me.

The torso feels too blocky, with the chest and abdomen being nearly the same width. The armor isn't inherently bad - with some really bright, vibrant colors it could work nicely - but this isn't a very exciting toy. You get your choice of fists or open hands for him, and bare or helmeted heads. This Cap doesn't look like Chris Evans, but then, neither did half the actual movie Caps. It's a handsome blond guy, what more do we expect? Weirdly, the unmasked head is larger than the masked one, thought the facial features do look similar enough to make it clear these are the same person. 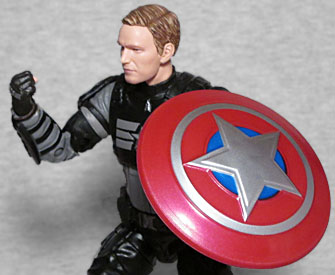 Game Cap gets a new shield. If the game had been a hit, that presumably would have mattered to somebody, but now it's just an interesting footnote. The front has a large star that isn't bound by the blue circle, instead overlapping all the way to the edge of the inner red ring. Then there's a thin "white" ring (actually a light silver, like the star) before a second wide red ring. The back is sculpted with rivets and a specially designed attachment for his arm/back (though the toy just uses one of those hinged peg/c-clamp deals like most of the Cap shields do).

The whole "Blue Lives Matter" thing is just a scam, something white supremacists only care about when it presents an opportunity to keep minorities down - if it weren't, the entire movement would have embraced Officer Eugene Goodman as its new face for his heroism in personally baiting last month's attempted insurrectionists and leading them away from the unsecured Senate chamber where they may have been able to take hostages. But the movement is not, because his face is specifically the kind of face they don't want to be associated with. And frankly, the idea that Steve Rogers would ever support that kind of racist bullcrap is ludicrous, so there had to be better options for a Series 2 repaint than making him look like a SWAT trooper. Hell, give him the tacky Verizon or Intel suits, at least those would be colorful and something we haven't seen before.