The Dino Dudes Kickstarter was not very clearly worded, so when I pledged for five complete figures, I was pledging for the five Fossil Edition dinos. But when the Backerkit surveys went out, it turned out you could only get those as an add-on, not by themselves, so I needed to pick something else to be the base of my order. Out of the six color options available (Reddish Brown, Green, Dark Tan, Sand Blue, Purple, and Glow-in-the-Dark), the GitD seemed like it would go best with the bony bodies. So take a look at how they blend, and maybe the clash between the solid bodies and the glowing suits will help make it apparent how the builds work. 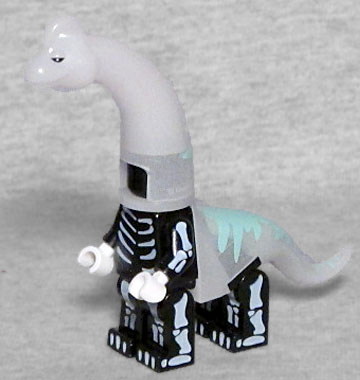 Here you can see how the brachiosaurus needs two pairs of legs for the suit to be fully filled. The arms do stand out a bit, though. 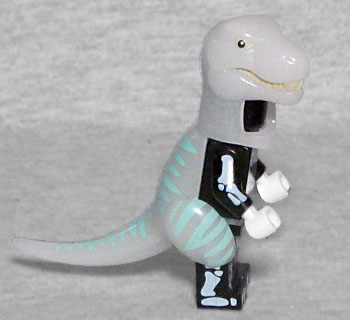 This should clarify how the Tyrannosaurus' big hips work on the minifigure body. 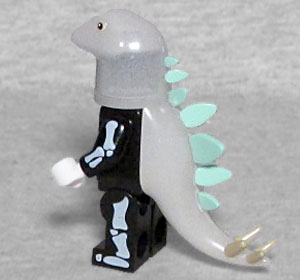 This not-evil stegosaurus has a single line of armed plates running along his back. The other suits get some patterning on the skin, but the paint here was saved for the spine. 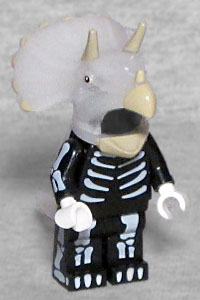 Here you can see how the triceratops' lower jaw (part of the body, rather than the head) works when there's some color involved instead of just bones. 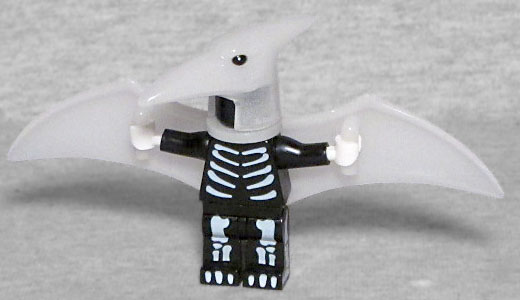 This angle shows how the "Crazy Arms" work - every pterodactyl includes one set of Crazy Arms in a matching color, but you need to buy a second set to have two straight arms. And since I was only getting the glow-in-the-dark set as a bonus to my fossils, I didn't care too much about that. (The Kickstarter listing originally said the pterodactyl would include two straight Crazy Arms, but that was something else that got changed along the way.)

If the Fossil Edition Dino Dudes had been available the way it seemed they were, I never would have gotten this GitD set, but being able to show them off two ways really is a lot of fun. Crazy Bricks did look into making the bones on the Fossils glow as well, but that would have been prohibitively expensive at this juncture. Maybe another time.