Come on, you know what we're going to say. 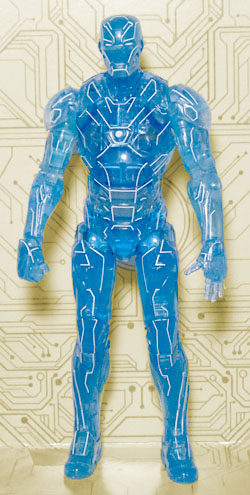 Ever the innovator, Tony Stark takes flight in a holographic form, a computer-generated avatar and an enduring force for good.

This is not an armor from the comics. It's the movie Mark 46/47 mold, but the only hologram we see in the movies is in Iron Man 2. There's a "Hologram" skin coming to that lame duck Avengers videogame, but this isn't a "Gamerverse" figure. This is purely an action figure variation, the Iron Man equivalent of Deep Dive Batman or whatever. You might as well say it's based on the packging artwork drawn by Cory Smith and colored by Jerry Wilson. It's molded in translucent blue, with thin white Tron lines painted on his front and only on his front. He's got alternate fists and dark blue repulsor blasts to fit in his palms. The shade of blue here is different from A.I. Tony Stark, so if you put his head on this body, they won't match perfectly - surely something that will upset the people who couldn't figure out why Human Torch's skin wasn't the same color as his uniform. 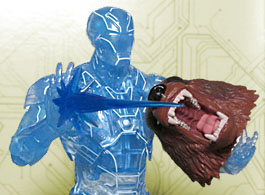 The only thing keeping this icy blue lump from hanging on pegs from now until the heat-death of the universe is the fact that it comes with a Build-A-Figure piece. An important Build-A-Figure piece: the head. Of Ursa Major, this series' BAF. Heck, you might want just this piece, because displayed in front of an appropriately sized plaque, it will look like a hunting trophy. Paging Mr. Kraven!