Wing 3 of the Transformers BotBots mall is home to a simply gigantic play space stretching from the ground floor to the roof, because they had a lot of Arcade Renegades to introduce. That means there's plenty of room for prizes and games, with Greed Feed being found down on the lowest level.

If you're going to have an arcade with prizes, there's one thing 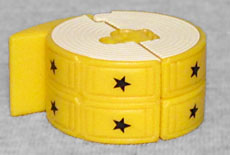 you're definitely going to need: prize tickets. If you collect them for long enough, you can trade them in for some awesome things! Which usually translates to "a plastic spider ring," because it takes thousands of the damn things to get anything worthwhile. This roll is yellow, with black stars on each ticket, and the sides of the roll are sculpted with rings so we can tell there are more tickets rolled up inside, not just the loose ones we can see on the exterior.

BotBots are simple to convert, and this one especially so: it's just a case of "open the front parts" and you're done.

There once lived a powerful and fearsome ticket monster, called Greed Feed. He claimed all the arcade prizes for himself and hoarded them in a giant mound 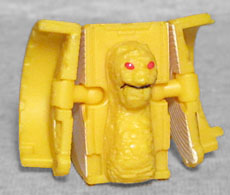 on which he sat. Greed Feed kept a watchful eye over his treasure, thrashing at anyone who came near it with his long ticket talons. To this day, those who try to take any of his toys get one mean papercut.

Another dragon? One that's apparently also half snail? The body looks like it's made of rubble for some reason - maybe crumpled-up stubs? He's got angry red eyes and a crooked black frown, but no other paint detailing. The only joints are the hinges and balljoints in the shoulders. Overall, this is a weird, uninteresting design. 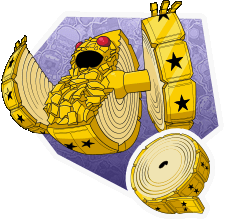