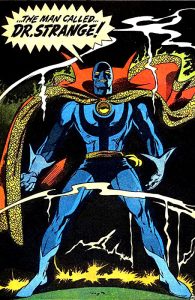 It's very similar to his standard outfit, but the tunic is turned into a full super-suit (including the legs, which are no longer black), the demonic shape on his chest is now darker than the rest of the suit rather than lighter, and the gloves are blue instead of yellow (with boots to match).

If this had been the first costume the character had ever worn, it might have worked; but as-is, it's sort of the "Andrew Garfield movie costume" thing, where it's so close to the very good original you wind up asking yourself why they even bothered.

This entry was posted in addendums, comics, Marvel and tagged Dr. Strange. Bookmark the permalink.