In today's review of Transformers Collaborative Gigawatt, we said the lightning hook never would have worked. How do we know? MATH! 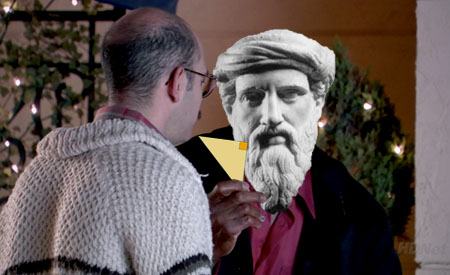 Okay, so you know the minute the lightning struck and stopped the town hall clock; that still leaves you up to a 59.999 second margin of error, and when you're traveling at 88 mph, you would cover nearly one and a half miles in that span of time. Every second you would move about 129 feet, almost half the length of a football field. 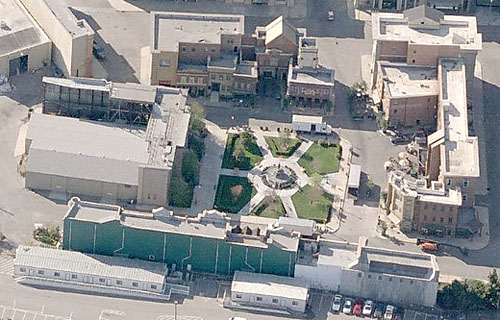 Hill Valley's town square was shot on the Universal Studios backlot, which means it's a real place with real physical dimensions. We may not have blueprints or accurate measurements, but we do have plenty of shots from the film and the ability to guesstimate.

Second Street (the street Marty drives down to hit the wire) is the same one he rides his skateboard down in the beginning of the film, hanging onto the back of a Jeep. We can see the street is approximately seven Jeeps wide, so about 33 feet.

The courthouse is three stories tall, so about 30 feet. Add another 10 feet for the clock tower and five for the lightning rod, and you've got a total estimate of 45 feet.

The building is roughly 100 feet wide. An extra wide walkway crosses in front of it; call that 20 feet. But then there's a good 13 feet of greenery between the sidewalk and the actual building, so 33 total.

Ah, but it's also dropping vertically, so we have to calculate the triangle again: from the clock to the lamp is 59.9 feet; but from the clock to (above) ground level is 20 feet, so now the wire can be estimated at 63 feet directly from clock to lamp.

Marty was driving down the center of a 33' wide street, so assume the hook hit the wire 16.5 feet across. Add 10' from the point where the lightning hit the roof, plus 63' down to the first lamp post, and 17' across the way, for a grand total of 86.5 feet. As slack as the wire is shown to be with the hook hanging from it (two or three feet of drop), we can assume it was drawn horizontally in the same path as the car for an instant, so we'll add another foot and a half to the total, for 88. To account for the way the wire was wrapped around the hands of the clock and any general looseness, let's round up to 95' from the point the lightning struck the top of the tower to the point it met the DeLorean. 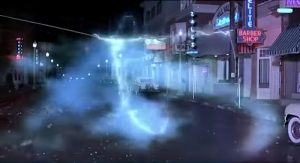 (If you're worried we're fudging the numbers too much, relying on eyeballed estimates for size and distance, don't: we're talking a natter of microseconds here. Doc might have built some capacitors to slow the energy down long enough create a little wiggle room, but we could claim the wire was a thousand feet long and the margin of error would still be infinitesimal.)

But there is a way Marty could increase his chances of a successful contact. Given all the info above, can you figure it out before we tell you?

Like we said, the speed the 1.21 jigowatts of electricity would travel through the roughly 100' of wire would be nearly instantaneous: all the lightning goes in one end, an equivalent amount of electricity is pushed out the other end. So if Marty was already in contact with the wire when the lightning struck, there would be a chance of this plan working. A chance. Because (we're going to round these numbers off to make the math plainer) traveling at 130 feet per second, and with a potential wire flex of 1.3 feet, he'd have to make perfect contact in 1/100th of a second, meaning even a slight breeze blowing could throw everything off - and this was in the middle of a violent storm! No luck, kid. So we see, the only thing that got Marty and the DeLorean back to the future was the plot being on his side.

This entry was posted in addendums and tagged Back to the Future, Transformers. Bookmark the permalink.