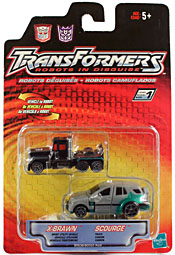 Megatron and his evil Decepticons arrive on Earth with one goal: destruction! This causes a secret force of goodness to emerge: the heroic Autobots, led by Optimus Prime. The have hidden their existence by taking the forms of vehicles, but now they reveal their true nature to fight Megatron and protect Earth. They are... Transformers - Robots in Disguise!

As mentioned in today's review, while we were all waiting for Scourge to show up at Toys Я Us, we had to make do with a Spy Changers two-pack. This Spy Changers two pack.

This toy is an all-new mold, but since it's ultimately based on Generation 2 Optimus Prime, it still turns into a long-nosed tractor trailer cab. It's 2½" long, 1¼" wide and 1⅛" tall. Four of the six wheels roll freely: the other two are just molded on. The hubcaps are chromed, while the grill and smokestacks are just painted silver. The proportions of the truck are a little bit different, but the black and red colorscheme makes it clear who this is supposed to be. 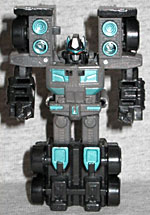 Converting Scourge is nearly identical to the bigger version: extend the legs, pull out the arms, raise the head. It's been simplified, but not redesigned. In robot mode, his shoulders come up to 2⅞" tall, and his only articulation are hinged elbows. There's no more red in this form (other than the eyes), but we get a lot of grey. The amount of teal is increased, too. The sculptural details on this little toy match the real deal - he has the totally fake "Optimus Prime" chest, complete with windows that come out of nowhere and a grill abdomen that turns into nothing. Even the lines on the legs have been duplicated! His feet don't fold down, so they have to stick out permanently in order to prevent him from tipping over backwards due to the weight of the truck's cab.

As much as I like Scourge, if the figure that shared his two-pack wasn't cool, I might not have bought it. But it turns out that he's paired up with one of the only other RiD characters worth a damn, X-Brawn! X-Brawn turns into a Mercedes-Benz ML320 SUV, though the toy obviously isn't in scale with Scourge: it's 2⅞" long and 1⅜ wide, and while SUVs are big, they're not bigger than tractor trailers! The truck is silver with green painted on the back. 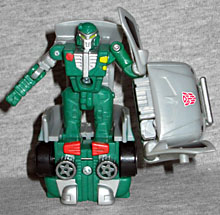 X-Brawn is one of the few RiD toys I bought, though I haven't reviewed him yet. This toy has an easier transformation than the real one: pull out the legs, open the doors, and straighten the arms (the real one has a lot more complicated twisting. Again, details from the big toy have been duplicated here, even if they're just faked: the best example of this are the "tires" on the front of his legs, since the real ones don't fold down the right way - they stay right where they are, which is right next to the falsies. As a robot, X-Brawn's weakest design feature is his left arm: the entire front end of the car sticks off it stupidly, and his fist is bigger than his head.

This Spy Changer two-pack is a good one, primarily because the two toys it's copying were good on their own.