Today I reviewed the Movie Maniacs 5 Sarah Connor, a figure I only have thanks to what I call the "geek layaway."

Let's say you're out shopping, and you come across some rare figure you may not see again (in this case, the good variant of Sarah Connor, but this could also apply to one that just has better paint than the rest). Maybe you're not sure you want it, or you don't have the cash on you to cover it, but for some perfectly valid reason, you can't buy it that very second. You need to leave the store and come back later. But the toy might be gone by then! What to do, what to do?

Well, why not put it on geek layaway?

No, I'm not talking about hiding it somewhere else in the store. Yes, that's a thing you can do, but it only works in a sufficiently large store. I found Sarah at GameStop on my lunch break, but wanted to ask Mrs. yo if she preferred one variation over the others (naturally, like all right-thinking people, she wanted the same one I did). You've been in a GameStop store before - if I'd tried to "hide" Sarah somewhere, it couldn't have been more than 10 feet from where she'd started, and that's not much of a hiding spot, is it? No, you need something better.

Well, the great thing about geeks is that we're predictable. Give us a choice of items, and we'll go for the best, most pristine one. So if you want to "save" a toy for later purchase, just ding up the packaging slightly. If it's on a blister card, fold a corner over, or straight-up tear it off; if it's in a clamshell, crush a corner in. Your goal isn't to harm the figure, or render it unsellable for the store, you're just making it so an eBay seller could never pass it off as MOC. Presented with two of the same figure, most people will go for the one in the perfect packaging, leaving the one you put on geek layway there for you. 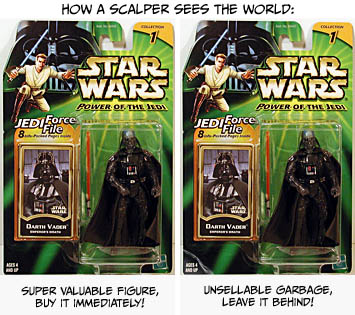 And thanks to the bum packaging, if someone does buy it before you get back, you can at least take comfort in the knowledge that it went to a fellow collector, not a scalper. That's why sometimes I'll even do it to figures I don't want, but I know are prime scalper bait - I'm putting them on layaway not for myself, but for the next guy. Pay it forward!

This entry was posted in addendums, Geek Speak and tagged Movie Maniacs, Terminator. Bookmark the permalink.