Due to the way Minimate packaging is designed, sometimes you'll be surprised by a figure when you open it. That was definitely the case with the Battle 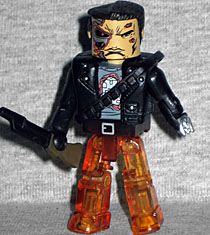 Damaged T-800. He's based on the end of Terminator 2, so you know he's going to be torn to shreds, but it's not until you open the box that you find out just how much.

The coat is new, and the bandolier around it is a separate piece. His hair isn't shared with any of the other Terminators, with the way it's oddly mashed down on the right. His face and chest are painted with the silver robot parts showing through, but that's all stuff yuou could see through the window on the box. No, the surprises are the new left arm, which is just a mas of shredded wires below the elbow, and the legs, which are cast from translucent orange plastic. What the what?! Obviously this is meant to suggest him being lowered into molten steel, but it's still completely hidden until you open him. 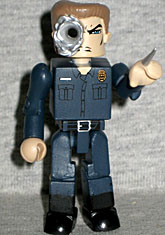 Since the T-800 in this set is taken from the Steel Mill fight at the end of the movie, you can guess that that's where the T-1000 comes from, as well. His police uniform has tall boots, since he'd already taken over for the motorcycle cop, and there are golden stripes on the outside of his legs. He gets a new hand, with the finger morphed into a silver spike that's perfect for stabbing through shoulders. The head is also new, because it has a hole running all the way through it! Seriously, they designed a new head and found a way to have the normal neck balljoint not be at all ruined by a hole running right by where the joint usually rests. Too cool! 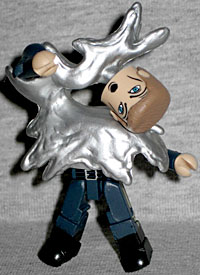 His accessories include a replacement hand, so he doesn't have a spike at all times; a second head so he doesn't have a hole through his face; and, oh yeah, an entire second torso that's been EXPLODED APART! So cool! It's a big silver mess, but it still has the appropriate joints so the head and arms can move around. The super-surprised look on his face is perfect, too. The only thing we would have changed is to put a second, calmer face on the back of the head, so you could have a completely vanilla cop - at best, you can have a plain cop who looks fundamentally surprised by everything that's going on around him.

Battle Damaged T-800 definitely lives up to his name, but those clear legs are just weird. The T-1000 is the star of this set; all his extra pieces really turn him into something special.