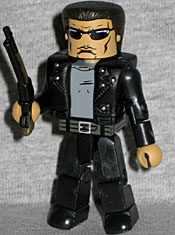 So the first "plain" version of a T2 Terminator Minimate was a store exclusive, and the second was only available through Previews. What's going on, here? Anyway, this figure represents Uncle Bob after he left the mall and was driving around the dry concrete trench that Los Angelinos laughably consider a "river." The jacket, which would be too big on most other characters, looks great on Arnold - it gives his chest an appropriate bulk. His glasses are painted on his face, rather than molded as part of his hair, and he's armed with his Winchester 1887 shotgun. Still no box of roses, though.

The second figure in this set is Kyle Reese, which is another example of Art Asylum cleverly finding the wiggle room in their license. No, Kyle Reese didn't appear in T2, and the license didn't cover the first film, so how'd they make him? There was a deleted scene where Sarah Connor dreamt that Kyle came to visit her. This figure doesn't have a great Michael Biehn likeness - the hair is too dark and the stubble is too thick - but the clothes make the man. With the green trenchcoat and the black tennis shoes (though they look more like Converse than Nikes), he's got the look down pat.

It's a shame this set was an exclusive: the Terminator is iconic and who wouldn't want a Kyle Reese figure?