In today's review of the Marvel Legends Face-Off Series 2 Wolverine and Sabretooth set, yo mentioned that John Byrne designed a face for Logan that he later used as a basis for Creed. Here's the sketch he sent to Chris Claremont: 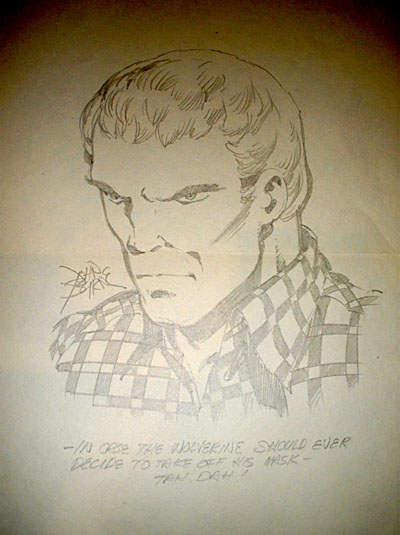 Ah, yes - that was my original suggestion for Wolverine's face. I sent that to Chris and he responded "You blew it! Dave has already designed Wolvie's face."

Not sure how that constituted me "blowing it," but that seemed to be Chris' favorite phrase at the time. (When he asked me to draw his mother into an issue of Marvel Team-Up, but sent no reference, I did the best I could based on having met her once before, and his response was "You blew it!")

Later, I modified that Wolverine face considerably, and it became Sabretooth.

Dave's design was, of course, based on Timberwolf, who he'd been drawing for a while in the Legion of Superheroes.

So there you go. Try to imagine Wolverine taking off his mask and being a blonde, sulky teenager underneath.

This entry was posted in addendums, comics, Marvel, ToyBiz and tagged Wolverine, X-Men. Bookmark the permalink.