Like many gamers, I first encountered the first-person shooter genre with Doom. As an adolescent who grew up playing Predator in the backyard, I was immediately mesmerized by its blend of science fiction, monsters, and blowing the crap out of stuff with badass weaponry.

I followed up Doom with many of the other great FPS games - Quake, Quake II and Star Wars: Dark Forces. And of course, the big shooter during my college years was Goldeneye, and my roommate and I played a lot of Perfect Dark. 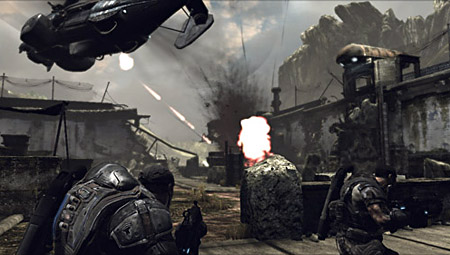 I was going to write that I lost interest in the genre until it was revived by the first Halo in 2003 (I came late to that party, as Halo came out in '01), but it occurs to me that there was really only a year or two between the time I was playing Perfect Dark and Halo. So apparently I've always been into FPS games.

Of all the games listed above, my favorite is probably Halo, which brought some great innovations to the genre - carrying only two guns, and the immense fun of the Warthog and other vehicles - as well as offering a surprisingly interesting story. The sequel, Halo 2, was great as well, though perhaps not quite everything I'd hoped for. But my hopes remain high for Halo 3, due out later this year.

In the interim, I have Gears of War to tide me over.

I've gone back and forth a lot on GoW. At first I loved it. Then I got annoyed with its short single-player campaign. Then I played through on the higher difficulties and loved it. Then I got frustrated with the multiplayer. Right now I'm sort of in the middle. I still like it, but other than working my way through the game on the highest difficulty level, I don't feel like I have much more to do with it, unless I can manage to become decently proficient at its multiplayer option. Which I haven't done yet. 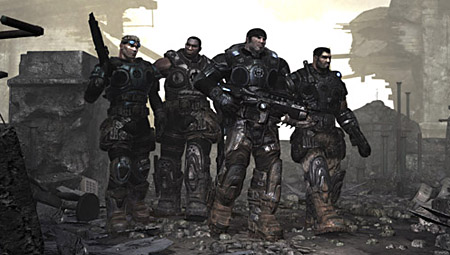 Gears of War was developed by Epic Games, the makers of the popular Unreal series. I hadn't even heard of GoW until I started to look into getting a Xbox 360. When I saw IGN refer to it as a killer app, I figured I'd better throw it on the wishlist.

GoW was built on the new Unreal 3 game engine. But unlike Unreal, GoW is a third-person shooter, which means you're watching your character's back, not seeing the world through his eyes with a gun at the bottom of the screen. This is key, because unlike any other shooter I can think of, GoW requires extensive use of cover. That's the big innovation of Gears of War: your character runs up to a low wall, or a bombed-out car, and with a press of the A button, he flattens himself against it. In this position, he's protected from any bullets coming from the other direction; he can pop up over the wall to fire off a few shots, then duck back down; he can lean out around a corner to check out something and then pull back; he can dive from one cover to another; or he can leap up and over the barrier.

You do a lot of this during the game. It sounds awkward in description, but it's very fun. That said, it's a bit tricky to get used to, especially if you're like me and are used to FPS games where you can run into a room and spray the place with bullets and still manage to survive. But once you master it, you'll be popping in and out of cover like a veteran soldier. Another fun part is active reloading; when reloading your weapon, if you tap a button at the right moment, you'll reload instantly and get a damage bonus. If you miss the right moment, the gun will jam and your character will cuss vehemently as he works to clear it.

The controls are more or less the same as Halo, which is good, since I get confused these days whenever I play an FPS that doesn't use a Halo-style control scheme. There are a few exceptions, such as the lack of a jump button and the use of the A button for all the covering and the "roadie run" (by holding the button down, your character will duck and start to run forward, with the camera bouncing behind him like a journalist with a Steadicam). But I've been playing a lot of both GoW and Halo lately and haven't had any trouble switching between the two.

Graphically, the game is an incredible visual experience. Unlike many previous shooters (including both Halo games), GoW doesn't have many straight lines or rectangular hallways. I've never played a game that looked this good. There are bombed-out streets, shattered Greco-Roman architecture, and even a few lovely trees.

It's funny; I sometimes feel like I'm jaded and can't really appreciate how amazing a game's graphics are, since I'm always expecting a new game to look better than the last one. But Gears of War is truly incredible. Following behind Marcus is almost like watching a real-life movie. The asymmetrical architecture and texture detail have been carefully and lovingly crafted. And the lighting is amazing; Marcus moves beneath a hanging lamp in a dark room, and his heavily-detailed form is lit briefly by the lamp, moving along his shoulders exactly as it would in real life. 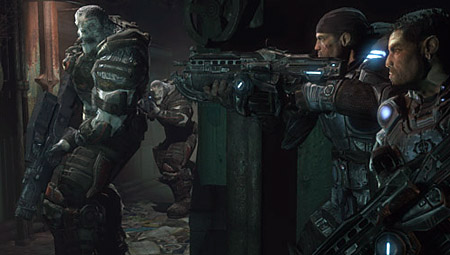 That said, there's also the question of art design. Sera is an ugly-looking world, and Gears of War, while beautiful in terms of its execution of digital realism, is an ugly-looking game. It's filthy, covered in dust, dirt and weapon scoring. The incredibly intricate detailing ability of the Unreal 3 engine is somewhat lost in all the grime, especially in the mine levels. While an early part of the game, featuring the aforementioned Greco-Roman architecture, can be breathtaking, the later part of the game has little of the awe and wonder I felt from, say, the gigantic outdoor spaces of Halo and Halo 2.

Also, all the soldiers look like linebackers. But Epic has been going with that look since Unreal.

The game is also very linear. This is a common complaint for many shooters in the age of Grand Theft Auto and its spawn, but I often felt like GoW was forcing me along a very specific path at all times. There's really only one route for pretty much everything.

One thing I need to mention is the music. Rather than go for the heavy metal or industrial rock of many first-person shooters, Epic went with an orchestral score. Composed by Kevin Riepl, it's very reminiscent of classic action flicks like Aliens and especially Predator. The music gets cued up at the right times and adds to the dramatic cinematic feel of the game. While it may be light on story (see below), I can't complain about the game's overall presentation.

Gears of War features an original science fiction story (and like Halo, it was written with some input from sf author Eric Nylund, now a contract writer for Microsoft). GoW takes place sometime in the far future (presumably) on a human-colonized planet called Sera. There they've discovered a glowing yellow liquid called "Imulsion," which I have to say sounds less like a mysterious new element and more like a secretion. Imulsion turns out to be an incredibly efficient fuel source, having touched off a series of wars on Sera. These wars come to an abrupt end on "Emergence Day," when humanity is attacked by creatures burrowing up from the depths of the planet. That's right - these aliens aren't from above, but below. So think more Mole People than War of the Worlds.

This is all just the backstory; the plot of the game revolves around one Marcus Fenix, a former decorated veteran of the human wars who was court-martialed and imprisoned for abandoning his duty and trying to rescue his scientist father from the bad guys, who are referred to as the Locust. The Locust - like the Covenant of Halo - appear to be a conglomerate of a number of species, ranging from the human-sized Grubs - basically white-skinned orcs with semi-automatic rifles - to colossal spider-like creatures called Corpsers (no idea why, unless it's a reference to what it tends to make humans into).

As for Marcus: despite having both a visible face and an actual backstory of sorts, he somehow manages to be more of a cipher than Halo's anonymous Master Chief. To me, Marcus felt like nothing more than a grim, humorless, alpha male tough guy.

I prefer a good story in my games. I tend to not be very good at multiplayer, so it's nice if the single-player campaign has a great plot, characters, and dialogue, in addition to great gameplay. I have mixed feelings about GoW's story. On the one hand, there's clearly a lot going on. For instance, at one point Marcus and his squad make their way through an area belonging to the "Stranded" - people who were not able to escape to the only remaining human city on Sera, but have managed to survive. Basically skid row. But if you haven't read any of the backstory, you won't know any of that; you'll just know the squad is referring to these people as "Stranded," and that these people clearly live tough lives.

It only took me about seven hours to beat the GoW on the easiest difficulty level; looking back, I wish I'd started on the medium difficulty. On the easiest level, you burn through the plot and the story seems wafer-thin. On my second pass on the medium difficulty, I'd gotten decent at the game and wasn't spending all my time just trying not to die, so I could slow down a bit and try to follow the story more. Unfortunately, I still found it pretty bewildering. Somehow, GoW's plot manages to be both thin and convoluted. Kind of like The Matrix. I think there's a lot of potential here, especially with the obvious allegorical link between Imulsion and oil, but half the time I couldn't figure out what Marcus and his squad were trying to accomplish. Halo takes its time and tells a clear, compelling tale; GoW gets so caught up trying to make you feel the rush of combat, the story gets shortchanged. For instance, there's a woman, apparently the leader of the Locust, whose role and identity are never explained at all.

The game also rips off pretty much any sf-action-movie trope you can name. There's a woman who constantly aids you via a radio link, a la Halo's Cortana. The Locust, as I mentioned, are very similar to the Covenant (and yet lack their personality, such as the adorably neurotic Grunts or the "wort! wort! wort!" of the Elites). The tough-guy attitudes of the squad are straight out of a hundred war movies, though the two that came most to mind were Predator and Aliens. Overall, the game is much darker and grittier Halo - but maybe not quite as fun.

3 Responses to Gears of War