In yesterday's episode of the new Transformers Animated series, the Autobots ran into their first human opponent, the Robin Hood-esque villain Angry Archer. Well, his outfit and m.o. were based on Robin Hood - his face was based on Aaron Archer: 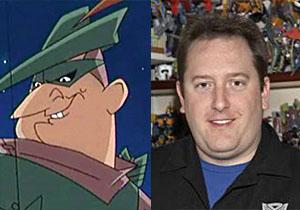 Archer vs. Archer - it's like Kramer vs. Kramer, but different.

Aaron Archer is Hasbro's design director for the Transformers, having worked his way up through the ranks starting way back with Beast Wars. Basically that means he oversees the design of the characters (and, by extension, the toys) and has a hand in the development of the tie-in shows. He's pretty much The Man when it comes to Transformers, so giving him a little nod in the cartoon is nice. It'd be like putting a character called "Jealous Falcon" in a Spider-Man cartoon or having Superman nab "the Brewer."

So take some other toy company heads - how would you put them into the entertainment properties they represent?

This entry was posted in news, random and tagged Transformers. Bookmark the permalink.