Yes, dear readers, that's right - it was 40 years ago today that Big Bird first stepped onto Sesame Street, which means it's entirely likely there are kids watching the show today whose grandparents remember its premiere. In 1969, no one was sure you could teach children basic scholastic skills via television, but Sesame Street proved you could, and signaled a massive change in the way children's programming would be produced. Plus, its urban setting reflected the culture of the time, and the increasing importance of cities in national life.

We at OAFEnet want to celebrate this momentous occasion in a slightly strange way: by sharing with you not some fond memory of Sesame Street, but rather by letting you in on a little bit of our pain: 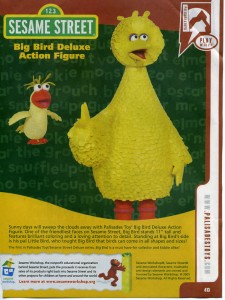 Isn't that just heartbreaking? That's Palisades' prototype Big Bird action figure, from the Sesame Street line that was just on the cusp of being released when the company abruptly folded in 2006.

The text in the picture reads:

Sunny days will sweep the clouds away with Palisades Toy' [sic] Big Bird Deluxe Action Figure. One of the friendliest faces on Sesame Street, Big Bird stands 11" tall and features brilliant coloring and a loving attention to detail. Standing at Big Bird's side is his pal Little Bird, who tought [sic] Big Bird that birds can come in all shapes and sizes!

It's heart-wrenching to look at that and imagine what might have been. Someone probably owns the prototype, and we truly hope they cherish it. Palisades was the first great toy company of this decade, and they're still missed to this day. So happy birthday, Big Bird, but forgive us if we're just a little bit sad that no one will ever get this great-looking toy.

This entry was posted in cancelled toys, commentary, Palisades, Previews and tagged Muppets. Bookmark the permalink.