While the first MOTUC He-Man took weeks to sell out, the second release - which had a much higher production run - sold out in less than a day. Evidently Masters of the Universe Classics has drawn in a significant collector following beyond the diehard MOTU fans whose enthusiasm drove the line's creation. For all the complaints about the price, it's clearly not that hard to swallow for many people.

The first He-Man re-release had a few problems: reversed shoulders (though you could hardly tell), a fairly glossy texture, and a reddish shading around the eyes that made it look like He-Man just watched the scene in Wrath of Khan where Spock dies.

The new figure has a very noticeable matte finish, more than any other MOTUC figure we compared it to. If you prefer your figures with a matte texture, then this is the figure for you. 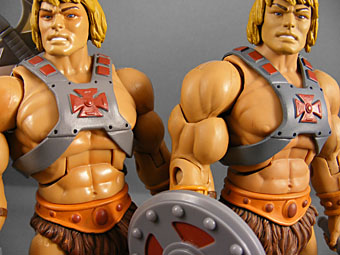 The head's glossy look has been cleaned up as well. 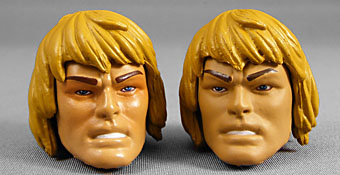 And finally, I guess the shoulders have been fixed. I'll take their word for it. 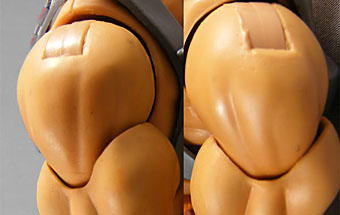 There’s one area where my old figure beats my new figure, though–the ankles. My reissue He-Man's ankles are loose, making it hard to get him to stand up straight. The older one's ankles are rock-solid. I was able to tighten my reissue's ankles using the superglue trick. But the fixed shoulders, matte finish and dry eyes give the reissue the edge as my new display figure.

This entry was posted in addendums, Mattel and tagged He-Man, MotU. Bookmark the permalink.