Need some scenery for your toys? 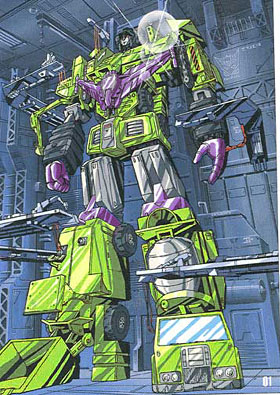 Have you ever wished you could have a big cool frame for your combiners, like the one in this piece of Devastator artwork? Well, you can't. Hasbro's never made anything even remotely like it, and let's be clear: they shouldn't. They have more important things to use their resources on than scenery. Can you imagine how stupid it would be to walk into Toys Я Us and see a package with nothing in it but scaffolding and I-beams? The thing would never sell. There are some Japanese companies that have released similar things (either for Zoids or Armored Core or something along those lines), but those are high-end model kits, not toys, and importing them would cost you the equivalent of an entire series of TFs.

Good news, though! You can make your own! And no, it doesn't involve hot-gluing together sprues from other model kits or anything. If you have a printer, some glue, and an insane level of patience, you can make this papercraft Maintenance Facility. It's huge, it's ridiculously detailed, and it looks really damn cool.

Head over to Paper Replika for the download link and a ton of other cool work. You won't believe your eyes!

This entry was posted in commentary, papercraft, reports and tagged Transformers. Bookmark the permalink.