Nick Fury addendum: where are the Hammer drones?

A few of our readers were having a conversation, recently, about the solo-carded drones from the Iron Man 2 line and how frustratingly hard they're been to find, which really makes us question Hasbro's distribution for these guys.

As you know, there are five drones in the film:

the original generic model that Justin Hammer designed, then one for each branch of the military. Except the Coast Guard, because there's no way they'd ever have the budget to buy any. The four "branded" drones have been released, leaving only the plain "Hammeroid" still outstanding. So, yes, we have all the major ones already, but getting them has been a pain. 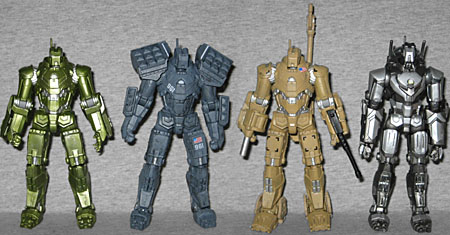 For the most part, the drones all share the same basic body, with a few differences in the limbs and accessories that complete their look. From ankles to elbows, they're identical. It's a nice sculpt, really capturing the feel of the movie. Remember, the idea is that the original suits were knockoffs of Tony's design: they're less refined and elegant, with blocky armor and exposed mechanics. They're meant to look like they wouldn't actually fit if there were a person inside.

The figures have a balljointed head, swivel/hinge shoulders and elbows, balljointed torso, (no waist, so you can't spin it around 180° and bisect whoever's unlucky enough to be inside), swivel/hinge hips, swivel thighs, double-hinged knees and swivel/hinge ankles. It was rather pointless to give elbows swivels, since the design of the suit is just a large hinge, and the shape of the upper arm keeps the lower arm from swiveling anyway.

So that covers all the sames. Let's look at some differences. 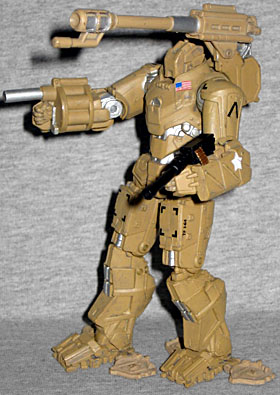 The Ground Assault Drone is the Army version - since using the real names of the military branches might imply endorsement, they each get little codenames. Well, not codenames; that suggests they're trying to hide their identity; these are more like... codewords. Like saying someone is "a confirmed bachelor" when they're gay, "feeling no pain" when they're drunk, or "honey from the icebox" when they won't put out. Anyway, the Army drone is desert tan, and is armed with a machine gun and a grenade launcher. Seriously, they're on his arms. There's a large cannon on his back, but while it's got a joint, you can't point it straight up like in the film. This one gets unique feet, too: large panels flip out on both sides of his feet, to help stabilize the suit when that big gun fires. 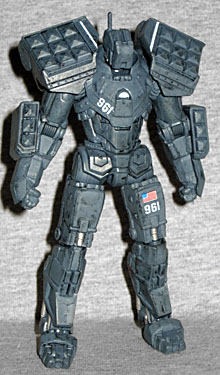 The Sea Assault drone, obviously, is the Navy suit. It's grey, but with a bluish tint to suggest water. While the Army drone was all about heavy, yet varied, firepower, the Navy drone is about one kind of overwhelming attack: missiles. There are two massive launchers on the suit's shoulders (bigger than in the movie, actually), and smaller versions on the forearms. There's an American flag on the left thigh, and the drone is apparently number 961. In a nice attention to detail, the back of the figure is painted with various warnings - "DANGER" and arrows, warning of hot exhaust - as well as the simple code VX-23. That one is particularly awesome, because it's the callsign for the Salty Dogs, one of the Navy's Air Test and Evaluation Squadrons - the guys who test the new planes. Of course the suit would go to them! 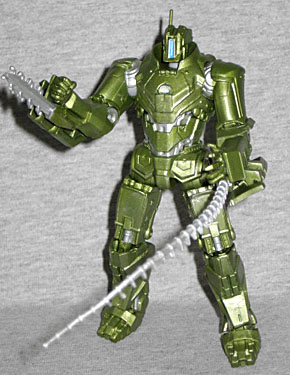 By the process of elimination, the Weapon Assault Drone belongs to the Marines. It's green, which, okay, yes, is a military color, but this is more "Lex Luthor battle armor" green than "military unit" green. In the film, these drones had a camo paint pattern, but that may have looked silly on a toy. This is the only drone without a backpack of any sort, though there are inexplicable hinged pieces of armor on the forearms. They can either stay on the side, or flip down underneath. Why? I don't know. That's hardly the most unusual choice in the design, unless you think barbed whips and wrist-mounted chainsaws are standard-issue Marine weapons. The Marine drone has an alternate head, featuring its thin blue eye (the normal head has the armored shield up). 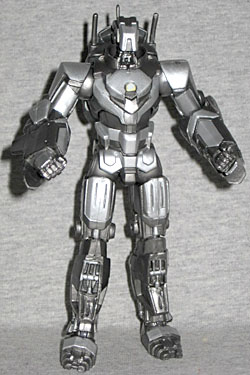 Finally, the Air Assault Drone. Clearly, the Air Force machine. It, interestingly, is an entirely new sculpt, not sharing any pieces with the other three drones. Why? Possibly to make it more streamlined and aerodynamic. The sculpt has the same general shape, but the lines curve a lot more. Articulation is also improved, with a wide range of movement in most of the joints, the addition of swivels in the forearms and balljointed wrists. Most of the joints were stuck when I opened this one: the plastic used in its construction is rather rubbery, and things were twisting rather than sliding past one another. The solution was hot water, not freezer time: with plastic like this, it's better to just take the joints apart and put them back together. The Air Force drone is taller than the other three, and has a neat jet booster backpack.

So, four cool drones - why isn't Hasbro just putting these things out by the caseload? Folks would eat them up. Kids love 'em, fans love 'em, army-builders would go absolutely nuts buying an entire battalion... but no. You have to buy two of them by themselves, and two of them with other figures you might not want. Hell, why not sell a four-pack as a store exclusive somewhere, with one copy of each drone? Let us re-create their unveiling at the Stark Expo. Make the cardboard backdrop part of the Expo stage, and let us make a full diorama. Hasbro loves packaging variations, too: they could do multiple inserts, allowing us to build an even larger stage! That would still let Hasbro sell the Hammeroid by itself, but would make the drones more readily available, other than having to compete with unsold early waves for shelf space, as is the case now.

So now, nearly two years later, we finally get to review the plain Hammer Drone.

Where Tony Stark is a genius, Justin Hammer is devious. Every piece of advanced technology in the Hammer Drone is stolen from Stark. Unfortunately, 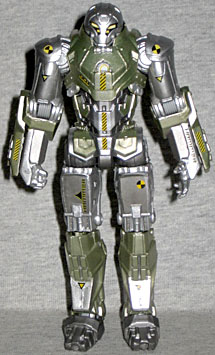 that makes it a bigger challenge for Iron Man. Its weapons are designed specifically to tear apart the hero's armor to get at the vulnerable man inside.

The "Iron Man Armored Avenger" line was meant to be a follow-up to the Iron Man 2 toys, but those things were so oversaturated that no stores bothered to order. Sure, some online places got them, but this is definitely a series of figures that never came out. But like so many other phantoms, they eventually showed up at TJ Maxx. You still had to be there at just the right moment to find the good stuff, though. The Hammer Drone is functionally identical to the Weapon Assault Drone up above, right down to the inexplicable hinged panels on the arms and the plug-in whips and saws. The suit is silver, with a unique head and several black and yellow "crash test" decorations found all over. It's a nice piece, but not worth what most people will have to pay to get it.

15 Responses to Nick Fury addendum: where are the Hammer drones?