In today's review of the Lockjaw and Betsy Braddock Minimates, I insisted, rather vehemently, that the line about Lockjaw being a mutated Inhuman was wrong, wrong, wrong. I mentioned that it was a piece of misinformation that featured in one comic in the character's 45-year history. Let's take a look: 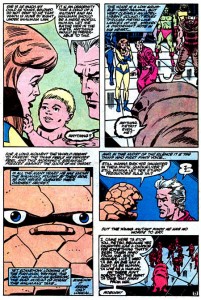 That was from Thing #3, written by John Byrne. Byrne, as you're well aware, has a history of revamping characters with little-to-no thought as to what's gone before. So for nearly 20 years, Lockjaw had just been a normal (space)dog, with all the characters treating him as such. If he really had been a family member all along, that was kind of a dick move on their part. Here, as explained by Peter David: 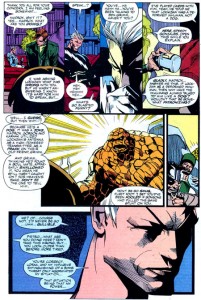 That's from X-Factor #71, and while it does have some problems of its own, it at least corrects Byrne's dumb retcon, so it has that going for it. But here's what Peter David had to say about the topic:

For what it's worth, I didn't give a damn about the Byrne story one way or the other. I thought it wasn't bad; not great, but not bad. It did, however, frost the flakes of several writers and the X-Factor editor, basically because Byrne's story made the Inhumans look like assholes. John Byrne, foremost advocate of adhering to creator intent, ignored not only sequences where Stan and Jack had the Inhumans referring to, and treating, Lockjaw as their pet or dog, but the subsequent decades worth of continuity that did the same. So, since Quicksilver was going to be in X-Factor, the writers - and the editor in particular - asked me to take the opportunity to undo that development as quickly and simply as I could. I shrugged, said, "Okay, boss," and did so.

It may not have been David's idea to take that angle, but it was a good one, and it was well done. So if anybody tells you Lockjaw is anything more than a big, mutated puppy, you set 'em straight!