So, I have a bit of a problem: I don't like to open my figures until I'm going to review them, in case I need any info from the packaging. But there are some figures that, in all honesty, we're never going to get around to. I have an entire filing cabinet full of unopened Minimates, some going back years. So taking a cue from Rustin, I'm going to do some fast mini-reviews of these figures. After all, every Minimate is built on the same basic body, so you really only need info on the paint and accessories. They seem tailor-made for this kind of laziness. This won't be a regularly scheduled feature, but I'll slowly work my way up from the beginning of the line to today.

Our first two-pack is from Series 5, released in 2004. This was back when there weren't any bio paragraphs on the packaging, but come on, you know who Captain America is: Steve Rogers, scrawny little wimp, takes drugs and turns into the perfect Aryan man. That's a good message to send to the kids. Anyway, this was the first Cap Minimate released, though he'd soon be followed by the SDCC exclusive. 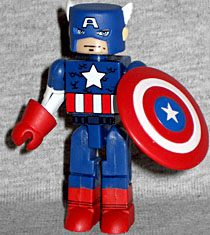 His mask is a thick piece, with cutouts to reveal his face. It's got molded ears and wings, but the A is just painted. Though the face beneath the mask is very good-looking, he doesn't have replacement hair, so you can't have him running around unmasked. It's kind of a shame his eyebrows and cheeks get lost when the mask is on.

The paint is good, and very much what we expected on Minimates seven years ago: it's blocky and cartoony, rather than fully detailed. The (off-center) stripes on his abdomen are perfectly parallel to the shape of the figure, with no hint of anatomy, and the scales on his dark blue upper body are just hinted at, rather than being painted over the entire body. His gloves were new molds at the time, but the boots are done only with paint, which doesn't really work for those big pirate boots he wears. His shield plugs onto a ring that fits on the figure's arm, but this set didn't include an ungloved hand, so the shield rides too high on the arm and gets in the way of the elbow.

For whatever reason, Art Asylum chose to pair Captain America 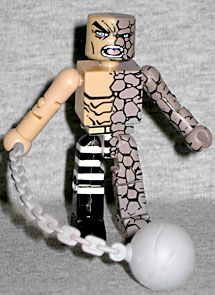 with a villain he's never really fought, The Absorbing Man. Okay, maybe they ran into each other once, but they're hardly arch-enemies. Absorbing Man is more of a Thor/Hulk foe. Still, whatever it takes to get the figure out, right? Absorbing Man has never gotten a second Minimate, so it's a good thing this one looks so nice. He was empowered by Loki and can absorb the physical properties of whatever he touches. His right half is human, and his left half is a pile of grey rocks. He's incredibly angry, and has one of the best faces from the first few years of Minimates. He includes his one must-have accessory, the one without which the set would be incomplete: his wrecking ball. The ball has a cracked texture and a nice, long chain with a smooth section specifically meant to fit in Minimate hands. The stripes on his prison pants are clean and crisp.

Since these figures are so old, they predate the C3 Minimate parts: that means the feet are weirdly long, the shoulders don't raise very far to the sides, and there are no holes in the tops of their heads. There have been better Captains America over the years, but there's never been another Absorbing Man, so this set remains one worth tracking down.