Every February we celebrate "Old Toys Month," a sort of counter-programming to all the Toy Fair hype from every other site. Today, though, we're going to go a bit "older" than we usually do - we're going back four millennia.

It's no secret that toys have probably existed nearly as long as human culture. Sure, kids would have started by playing with rocks and sticks, but as humans invented tools, it wouldn't have taken long for them to use those tools to create better things to keep the kids out of their hair. We've even mentioned before that Egyptians had action figures (carved human figures with separate arms and legs held to the torso by rope, creating rudimentary articulation). But while we've known that toys existed, a new paper suggests that, even more than that, toys were important.

An archaeology thesis from the University of Gothenburg has posited that play-related artifacts found at archaeological sites are unfairly ignored or disregarded as unimportant. 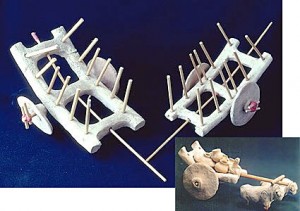 Authored by Elke Rogersdotter, "Gaming in Mohenjo-daro – an Archaeology of Unities" re-examines play- and game-related finds from Mohenjo-daro, the largest Bronze Age settlement in the Indus Valley Civilization (located between India and Pakistan, the valley was formed by the flow of the Indus river from its headwaters in the Hindu Kush mountains).

The Indus Valley Civilization is more mysterious than other ancient civilizations, because we don't have any idea what they spoke or who their descendants are. 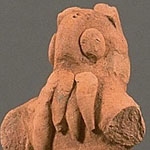 While other cultures left behind huge architectural monuments or impressive artwork, the IVC has none of that. The largest piece of art is a lifesize human bust. Despite the fact that Mohenjo-daro was home to approximately 35,000 people (the same size as Annapolis, Maryland, or the entire country of Liechtenstein) and has a clear architectural plan (straight, intersecting streets with moderately-sized buildings grouped into different residential and commercial areas), there's no indication of anything that might be a palace or temple, no large structures the culture might have been centered around. What is found there, however, are piles and piles of toys.

One out of every 10 artifacts found in Mohenjo-daro is a play item. 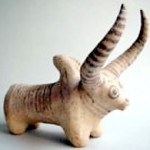 Think of all the pottery, weapons and jewelry you see in a museum. There's a lot of it, right? Well, in Mohenjo-daro, a tenth of that would be replaced by toys, dice, game pieces, etc. And for the most part, they're found in concentrated areas: most archaeologists would consider those midden heaps, but Rogersdotter suggests these were areas specifically set aside for playing. She also believes that play-items have been overlooked at other sites, or reinterpreted as religious symbols because archaeologists didn't consider something as irrational as "playing" while excavating.

You can read the entire thesis here. It was successfully defended last weekend.