DST Head honcho Chuck Terceira came out to indulge all of our Minimate questions. It was, as always, a small crowd but there was a good flow of questions and while there were the usuals ("where did you get the idea for Minimates," "why don't you make ____") there were more that allowed for some good, fresh insight and it was overall more enjoyably than some of the previous panels at SDCC.

Once again, I took notes throughout, and offer them to you now - Behold: 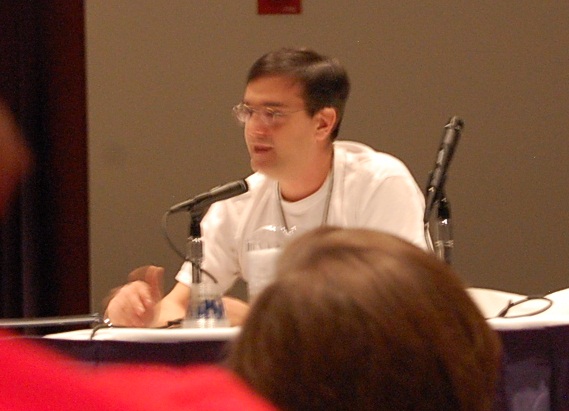 MAX vehicles will be combineable amongst each other.

Four series of Halo are planned, including a possible 10th anniversary wave.

Paramount approached them to do TINTIN, but they passed because there wasn't enough time to get product together by the release date.

They can't afford a license for just Minimates only, because of the low price point the return-on-investment is just too low. That's why most licenses cover things like statues, banks and neon signs.

Interested in doing Doctor Who to break into EU, but no interest from retailers when Underground Toys shopped the idea around.

They'll probably do a 2" Galactus.

What is shown is all they are officially planning for Real Ghostbusters, though they may probably do an Anti-GB boxset (the Peoplebusters), if it's a huge success they'll do sets, of course

They have talked about doing a Zombie line, with extra limbs, etc (Marvel will not allow any more Marvel Zombies product)

Turned licenses down because they wanted Minimates in different scales

New MAX product in Spring - TRU claims they have a lot of inventory, but nobody can find them. PO in hand so there will be definitely be another wave.

Blanket deals like the MGM one is tricky. Still trying to pull off the Paramount figures (Godfather & Beverley Hills Cop). CBS has talked to them about classic TV shows but no shows really grabbed Chuck.

Marvel vs Capcom is like a blanket license - it covers all Capcom characters that appeared in any of the games, even hidden and downloadable characters.

Don't really consider creating new pieces in ways they can be used for other parts.

They are working on two new Halo vehicles because the warthog has done very (with all the variants). One more definitely come out but probably both will.

Chuck is well aware Kang is wanted but nothing is planned.

He was kind of surprised they even got a chance to do the new BTTF set, there aren't anymore planned but always open to doing more if sales are there.

"Agent Coulson is the R2D2 & C3PO of these movies"

The Sony license is heavily specific so that line is pretty tricky and as a result there probably wont be more than just the 4 two-packs.

To cement their claim to the rights/trademark to Battle Beasts they had to market it over state lines. Now that they have, they're trying to figure out what exactly to do. They've created a story/world. Want there to be a game element. No chance of heat stickers at all. Lots of work/effort and don't have the resources to fully dedicate to that right now so no plans to announce.

Since comics don't really show characters' backs, they designed Ultimate Iron Man's back for the mini-bust, with Bryan Hitch's input/feedback, and the bust then became his maquette for drawing.

Marvel vs. Capcom should be out July/August - Chuck has planned 3 waves, which include all the characters from the game, except for unrevealed characters or 2 or 3 that simply cant be done as minimates. He's even looking at doing MODOK.

Never thought of a new hand at 45 degree angle which could allow figures to hold guns with two hands, but will pitch it to the group next week.

They've talked about bags of flight stands but no plans yet. Maybe a kick base for capcom, etc.

Exclusives: One four pack for SDCC, a TRU 4-pack for SDCC, and the Disney Store wants a 4-pack but if it doesn't make Disney's date, that may move over to SDCC.

He has looked into Godzilla, really wants to do it, but no dice from TOHO

This entry was posted in Art Asylum, C2E2 and tagged Back to the Future, C2E2 2011, Doctor Who, Ghostbusters, Godzilla, Halo, Iron Man, Minimates. Bookmark the permalink.