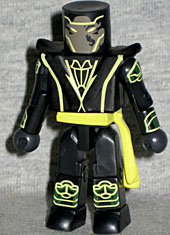 Marvel Minimates Series 12 was all about the New Avengers (who weren't actually all that new by that point - the series came out in November 2006, two full years after the comic debuted). We've gone into detail before about who Ronin is, who he was, and who he was meant to be, so go read that instead of making us copy and paste it. Because that would just been an excuse to fill up space. Most of Ronin's design is accomplished through paint, which is nice - if he were being made today, he'd probably have add-on greaves, gloves and whatnot. As it is, only the belt/sash and pointy-shouldered tunic are more than the usual Minimate offerings.

The New Avengers were brought together by a supervillain breakout 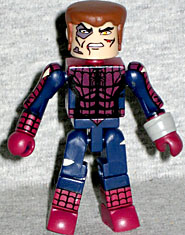 at the Raft prison - Spider-Man was there to fight Electro, and was pulled into the action. Actually, he was thrown into the action: Count Nefaria picked him up and tossed him into a pit of bad guys, where he got his ass thoroughly kicked. His mask was ripped off, and Jigsaw broke his arm. The figure has a black eye, bruises and cuts on his face, and rips in his costume. Instead of a normal Minimate hand on the left arm, he's got a glove painted gray to look like a cast made of webbing. The colors used for his suit are much darker than the average Spidey: maybe it's because the fight took place at night, maybe it's because he had to swim part of the way to the island prison, maybe it's just because he's supposed to be grim and gritty. 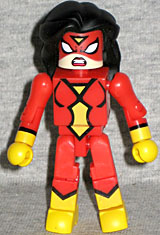 A month or two after Series 12 came out in comicshops, Target got a series of Minimate two-packs that also included Riot Attack Spider-Man. Except he didn't come with Ronin, he was paired with Spider-Woman. She'd been released in Series 10, but was changed slightly for the mass-market. The difference is her face: the first release was smiling, while this one is scowling. That's it. The figure is molded in red plastic, and the yellow parts of her costume are painted. The big black lines separating the colors aren't just a comicbook conceit, either: she really has thick black lines on her costume for real. Well, "real." You know. She uses Phoenix's hair, cast in black.