This is the latest in a series (of indefinite length and regularity) of blog posts memorializing cancelled toys. Our figure today is a repaint of The Beetle.

As mentioned in this review, there was, at one point, a plan to repaint green-and-purple Beetle in blue-and-silver Mach-I colors. Maybe. 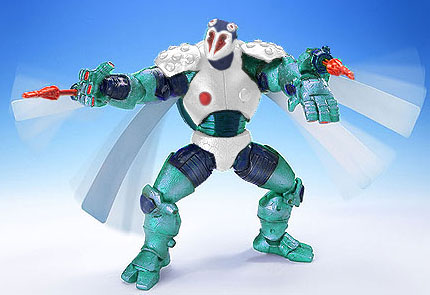 All we ever saw of this potential repaint was some concept art, designed to sell the toy to retailers. But ToyBiz insisted it was never actually planned for release - however, the same leaked art also gave us our first hint of Demogoblin, so it's not completely outside the realm of possibility. But the Hasbro figures have started coming out now, and there's no sign of a repainted Beetle, not even in the solicitations for upcoming figures.

This figure hasn't been officially cancelled. But it was never officially solicited, either. Either way, we're probably not getting it.

This entry was posted in cancelled toys, Hasbro, ToyBiz and tagged Spider-Man. Bookmark the permalink.