A new way to play with Legos

Miniature wargaming has a long and dignified history. In the loosest interpretation of the idea, any sort of proto-chess that involved one set of pieces competing directly against a second would be a miniature war game. But things really got rolling in the 19th century, when the Prussian military used kriegspiel as a training technique, complete with sculpted terrain for the figurines to capture. HG Wells was a fan of wargames, and even published a book of rules for the game. These days you can play historical games, fantasy, sci-fi, pretty much whatever you feel like.

There's one thing that every miniature game has in common, though, and that's the barrier to getting started: buying figures is expensive, especially if you want to build a competitive army. You think you spend a lot on action figures? Make friends with someone who wargames, and watch them spend $20 on an inch-high piece of metal. Plus, every piece needs to be painted, which is another outlay of cash and time (and no, you can't just leave them bare: unpainted miniatures aren't tournament-legal). Thankfully, there's a way around all that, and the answer is toys. 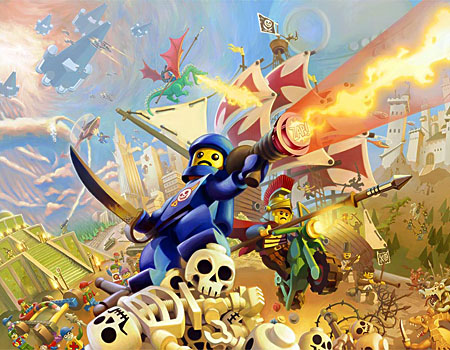 A decade ago, Mike Rayhawk created a battle game called "BrikWars," which works just like any other miniature game: two or more players build an army and run at each other until only one is left. But in this case "build" an army is really the operative word, because the whole thing is based on Legos (and other building blocks, but there's no question which one is best). The game rules are free, and available online. They cover pretty much everything you can think of, including what kind of damage different weapons do to what happens if you build a space ship and someone shoots out the controls.

Any block-built figure is compatible with the rules, and that doesn't just mean you can use Mega Bloks figures beside your Lego Minifigures - anything can be accommodated, so you can mix in your Minimates and Kubricks, and even your Bionicles. It's all been accounted for. You can use the Legos you already have to build terrain, you can mix and match body parts to design your own crazy warriors. For instance, the site has instructions on how to build your own Brikthulhu.

The game seems simple to play: hit points are just as modular as the bricks themselves - 1 hp per bump on the brick - so you can do the math on any creation. So go check out BrikWars, then dig out all your Legos and see what kind of fun you can have.

This entry was posted in Lego and tagged Minimates. Bookmark the permalink.