Rustin's Spoils of the Week #13

Whew. Finally a slow week after a couple blitzkriegs on the ol' wallet. This one brings us some three quarters of the Toys R US Thor Minimates, the completion of PotC:OST 6 inch series 1, a touch of the Lego and an uber throwback to childhood nostalgia. Read on! 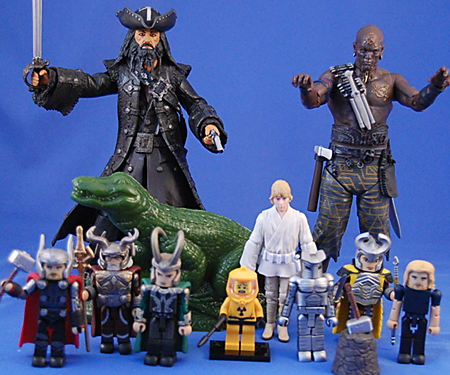 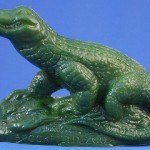 I visited the Brookfield Zoo outside of Chicago for the first time this weekend. While the zoo itself was fairly unremarkable they did have those machines that make instant wax models of animal creatures! What an awesome throwback it was just to even see the machines, which have not changed in any capacity since the '70s. Basically you put in your money - $2 now - and then a whole bunch of machine sounds happen, two mold halves press together, fill with hot wax, the mold separates and a spatula slides down and pops the figure off the plate for immediate retrieval. Immediate toy construction right before your very eyes! The smell of melted candles fill the air and verily, the figure is notably hot once got. The sculpt is pretty simple but fairly accurate for an alligator, and the base has "BROOKFIELD ZOO" etched into it. Just a delightful ticket to nostalgia-ville and all of those boyhood trips to Los Angeles Zoo. They had a handful of these spread across the zoo representing many of the most popular animals all in bright, single tone colors. 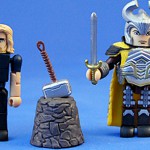 One of the two "exclusive sets" for TRU in the series. Included is the super-cool Guard figure what comes with a sword and spear (presumably it's these accessories that make him an exclusive, since this guard also comes in the single packs). His helmet is of course removable, but I had a real hard time getting it back on properly. His cape and chest armor are a single sculpted piece that slides over the torso. Nothing shocking about that, but it's notable as that won't be the case for all Asgardians. "Civilian" Thor is the very non-descript black pants/dark blue shirt combo from the trailers. It's a pretty boring figure but completes the human display started in the Specialty Market packs and Singles box. What makes him special though is the dirt mound base for the Mjolnir to rest in. It's not visually accurate to the film or comic, which lack the pillar-esque mound, but that's no problem here and is a very welcome addition. 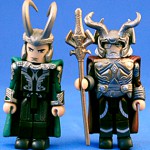 Loki's helmet is so cool! Both figures come in full Asgardian regalia. Odin, like his guard above, features a torso cover piece hosting both armor and cape, as well as the same gauntlets as the guard. Loki, however, has just a sculpted cape add on, the rest is all paint - now that's what I'm talking about! This is exactly what I want from my Minimates - simple in terms of sculpt, detailed in terms of paint. While I understand that not always possible, and I do love the alternate costume hid under torso pieces, this is how Minimates also look their best. The sole accessory here is Odin's spear/staff. I'm kinda bummed there's no alternate hair pieces for non-helmeted look, but if I had to choose it would certainly be all helmets all the time. 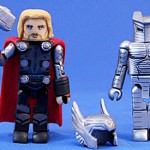 Aaaaah, the delight on titular characters! Like his mischievous brother before him, Thor's armor comes to us direct from the world of paint applications, with only his cape being an added on piece. I do love this return to paint for the more elaborate parts. Thor of course comes with his trusty Mjolnir hammer and an alternate hairpiece for that oh so popular un-helmeted look. Destroyer is a great entry too, using the second-gen torso bulk-up piece (featured on the upcoming Hulk Minimate) and plenty of paint deco too. Another great touch is the head is a standard Minimate head but with a new piece slightly featuring the angular "brow" and doming off the top. It would have been neat for the paint to be more steel or metallic in nature but this is fine. It would have also been neat is there was an alternate head cast in translucent orange with the "eyes" unpainted for "fire attack" mode, but what are ya gonna do? Ultimately the only real bummer about this set is that Destroyer doesn't use the semi controversial "duck feet" or Cyclon torso extender to give him that extra bit of towering-ness. That's a shame but this is still a killer set. 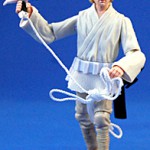 I love Star Wars like all get out, and I love that Hasbro has been able to keep the line alive to the point of doing every variation possible. I'm serious - I love this crap. However, the $9-$10 pricetag steals a lot of the fun from these figures. I have no interest or nostalgia in the throwback Kenner cards and think it's horribly offensive to use that an excuse to hike the price. This is a series that has the same volume of kitbashing as a series of Clone Wars, and were it also $6-$7, I would have bought everything. Instead, it's cherry picking to the X-Treme (and yes, my cherry picking is of Luke in a white belt. Screw off, it's a subtle costume change but one he wears for a substantive portion of the first (read: best) film). This guy is just a new head, belt and softgoods skirt on a reissued figure which in turn was itself a kitbashed piece. He does come with a Stormtrooper blaster that fits snuggly in the belt's holster, a commlink and the grappling hook attached to a length of rope - perfect for lusty sister rescuing. 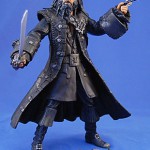 Finally found an acceptable paint job, and you know what? These are only $12.99 at Toys R Us. Suck on that, Walmart, and your $14.99! For $13 these are not as offensive, but rest assured this is still a lame, lame figure. The sculpt and paint are executed rather well, especially in comparison to the 4" louse. The rub, though? How does 10 points of articulation suit you? Oh yeah! If you hate figures with knee and elbow articulation then this is the figure for you. He's got balljointed shoulders and the same inexplicably large cutouts in the coat around the arms. Plus, the arm poses and balljoint offer remarkably little variation in pose, they may as well be swivels. Accessory-wise we get the sword, the hat and the only gun in the series that doesn't have smoke coming out of it. Seriously... I want to talk to whoever is running this line and have them explain the logic behind what they're doing because I'm not seeing it in the least. I half expect they have managers for the individual figures rather than the line as a whole, and those people just don't care to talk to one another. I really want to recommend this figure, but the lack of articulation just... well honestly it ruins what would otherwise be the best figure in the series. 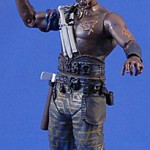 Blackbeard comes with Gunner's left leg which thusly means that the Build-A-Figure is complete and built - and here he is. This is one of the zombies from the new film and while we have yet to have any insight into what they are, where they come from, etc., it's probably safe to say they are voodoo-ish homunculi under the command of the feared Blackbeard. Not since DCUC Series 1 have we had a Build-A-Figure that's just another figure, i.e. a standard 6" character, and also interesting that it's "just a guy" and not anything immediately compelling. Moreso than even lackluster character choice, this figure is a real test of the Build-a-Figure concept. There's no reason to get him unless you're a completest or OCD. He's not big, or especially cool he's just background filler, and with a line so mediocre already he's not enough of a "pot of gold" to make one want to spend the $75 + tax to follow this rainbow. Despite that, though, he is at least on the more "toy" end of this line. Limited-motion balljointed head, balljointed shoulders, hinged elbows, swivel wrists, swivel waist, V-Crotch, swivel thighs (huh?) and swivel knees gives him four more points of articulation than the main villain has. Gunner even comes with an axe and a sword! Though the axe looks really ugly in that it lacks any sense of detail and the sword's handle is way too small for him to hold. At least there are loops in the belt to stash these - so yes, Gunner is the only figure who can carry a sword while not holding it despite every figure that comes with a sword also having a scabbard. It's a good sculpt and good paint but as a BAF he lacks a sense of specialness or importance. 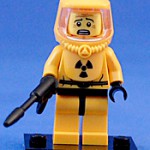 I got this guy because he has the easiest to figure out accessory when you finger the heck out of the packages since that's the only option that Lego has left us. I. HATE. BLIND. PACKAGED. FIGURES. Yes, it's great fun in Japan, but this ain't Japan and I ain't happy getting a ton of X while struggling to trade for Y. It's dumb and Lego is dumb for doing it. This figure is pretty neat though. The "oh crap" face is cute but I would have preferred some sort of radioactive thing instead of the hose as a result. The gun/nozzle can be easily held in hand while the hose plugs into the back of the suit. So... I guess he's freaking out because he's either shooting out his good air or sucking in the bad. It's a fun figure, but an air tank and green rock would have made it much cooler, but hey, you know I hate to complain...

4 Responses to Rustin's Spoils of the Week #13