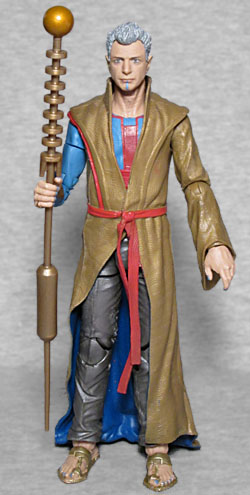 The exuberant and dangerous ruler of a distant planet built on chaos and indulgence, The Grandmaster controls an incredible gladiatorial contest in which Thor and other powerful beings from throughout the cosmos face-off in spectacular and deadly combat.

Imagine going back in time and telling yourself as a younger collector that one day, not only would there one day be a Marvel Legends Grandmaster figure, there would actually be two released in within a month of each other. And that they'd be nearly identical, with the only difference being the expression sculpted on the photo-realistic face - SDCC Grandmaster is laughing and smiling and having a good time, while mass market

Grandmaster is more serious. Other than that, they've got the same body and same articulation, though the retail version's Melt Stick doesn't get bent in the tray.

Unfortunately, even if you got the SDCC set, you might have to double-dip on this one, because the second figure in the set is Thor's new buddy Korg. 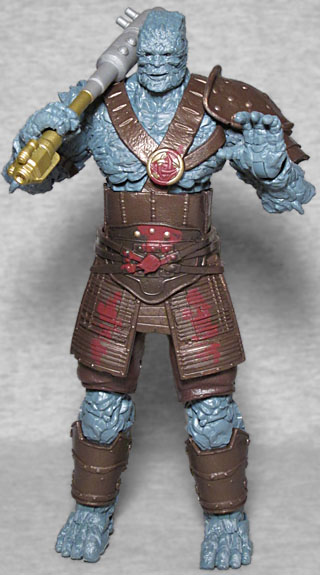 A giant rock monster of the Kronan species, Korg is a captured revolutionary forced by the Grandmaster to fight in his gladiatorial games.

Korg was a character from the comics - he was one of the "Warbound" introduced in the "Planet Hulk" story, from which Thor Ragnarok was adapted. He's not the first Kronan seen in the MCU; that honor goes to the guy in The Dark World who got pulverized to rubble by Thor. We know Korg has a mum and that mum has a boyfriend, but why's she got a boyfriend and not a husband? Was Korg's dad the one who got turned into not-so-fruity pebbles? That'd be sad! And ironic. Saironic.

body, Korg is actually a sweet, polite bloke who's friendly to the people he meets. Suitably, then, his pointy rock head is sculpted with an innocent smile. He deserves it! Considering that Korg was voiced (and mocapped on set) by Taika Waititi, does that mean this is technically an action figure of a director?

Korg's sculpt is entirely new. He looks a bit like 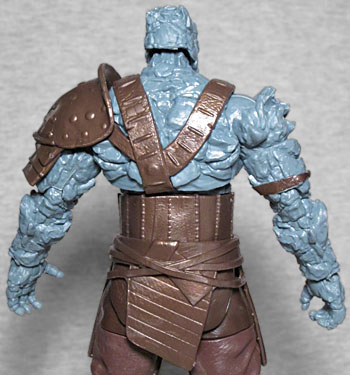 the Thing from the terrible Fantastic 4 movie that no one went to see, but that movie was such an orphanage collapse that it didn't get a single toy from a single company anywhere. His exposed body is rough and craggy, of course, and he wears shorts and some armor around his waist. The greaves are separate pieces that fit into notches on his legs, while the pauldron is attached to the left shoulder ball. The chest is a balljoint and the waist is a swivel, which meant that the abdomen on my figure was accidentally turned around backwards when I opened it; just remember that the sculpted strap goes in the front, not the back; it lines up with the big disc on the harness. Why isn't there a matching piece sculpted on the other side?

The only accessory is the club thing he picked

up on Sakaar. It looks like it would just be something you hit people with, but he's seen using it to shoot the army of the dead when he gets to Bifrost. He's seen holding other guns in the movie, plus a three-pronged wooden stake, but none of those made it to toy form. This also would have been a good opportunity to make a little Miek he could carry around.

Korg is a cool character, but this set would be a lot more appealing if there weren't a Grandmaster in the SDCC set.