The central area of the Transformers BotBots mall has two spots for the Sugar Shocks to hang out: one on the ground floor, one on the third floor. Cocoa Crazy and three of his friends are partying upstairs - but he's the only one who's in robot mode.

At least 2,500 years ago, the Mayans were drinking xocōlātl, a brew made from 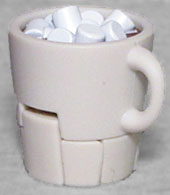 pulverized cocoa seeds, water, cornmeal, and chili powder. Because sugar wasn't available in the western hemisphere at the time, the drink was bitter. It was poured back and forth between vessels until a thick, scummy froth formed on top. Delicious! In Mayan culture the drink was consumed by all social classes; by the time the Aztecs got their hands on it, it was a status symbol reserved only for the bourgeoisie and on up. These days you can get it in packets at any grocery store. This mug of the stuff is topped by nine chunky white marshmallows - so many you can barely see the brown cocoa beneath! The mug is beige, making for a very mono-tone altmode.

BotBots are easy to convert, so all you have to do here is raise the arms to the sides, turn the body around to uncover the face, and fold down the legs.

Cocoa Crazy is a marshmallow-head who can be goofy at times. 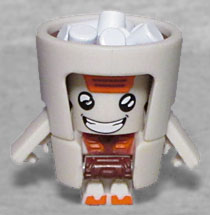 No one's sure if he's crazy for cocoa or he's marshmallow mad, but he has a way of warming your heart. (Maybe it's those yummy marshmallows he shares!)

This is a very adorable robot. The body retains the shape of the cup, obviously, and he's got a brilliant smile on his face. The arms can't do much more than hang out to the sides, but there's really not any other articulation. The orange and brown body details are reminiscent of Latte Spice Whirl. Or Dunkin Donuts. 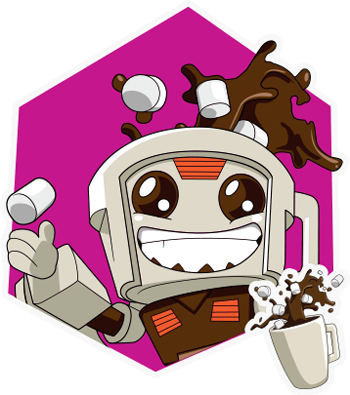 Cocoa Crazy is only available blind-packs, where he's Series 1's #4.