Between Series 1 and Series 2 of the Transformers BotBots, there was meant to be a bonus series, featuring two new tribes, one of which was the Bakery Bytes. "Series 1½" would have been a Toys "Я" Us exclusive, but that didn't happen, so eventually the sets showed up on Amazon with no announcement, and definitely not between 1 and 2. But hey, better late than never!

Most of the Bakery Bytes are repaints of existing molds - no shame in that, 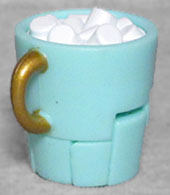 they're hardly the only tribe where that's true. Although this is a repaint of Series 1's mug of cocoa, it's a bit hard to tell what it's supposed to be. The marshmallows in the mug still look like marshmallows - they're white, they're round, they're heaped upon one another - but all the character art seems to suggest they're not marshmallows anymore: every drawing shows cubes, suggesting this is supposed to be... a mug full of sugar? Why would sugar cubes be round? They're cubes. Maybe this is supposed to be even more old-fashioned than it seems, and we're supposed to read them as snips off of a sugarloaf, a way of selling sugar that went out of style before the start of the 20th century?

BotBots are easy to convert, so all you have to do here is raise the arms to the sides, turn the body around to uncover the face, and fold down the legs. You've got a Cavi T.!

No bio info has ever been provided for any of the Series 1.5 Bots, so we just have to draw our own conclusions from what is known. For instance: the team art shows them falling off the top of a blender, having slipped on... butter? The card art 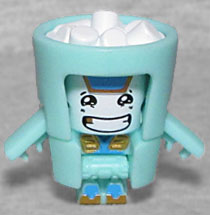 shows them riding Batter Splatter like a rodeo bull. So if there's one thing we can say for sure, it's that Cavi T. likes being on top of precarious appliances.

Obviously this is the same mold as Cocoa Crazy, but the mug/body is light blue and the handle is golden, so this is more colorful in the altmode. The dark blue robot parts don't stand out much from the rest of the body, it must be said, and the golden tooth in the corner of their mouth (replaced, no doubt, because of a cavity) blends in with the black, so you might not notice it at first. Maybe "Cavi T." is supposed to be like "Cardi B," and this BotBot is a sugar-fueled rapper? Again, it's totally up to you. 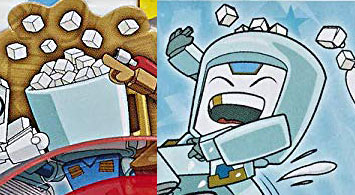 Cavi T. was available in one of the Bakery Bytes 5-packs, and in both of the Lawn League 8-packs. The mold was supposed to be used again in Series 6 (as "Mr. Squishy Brains"), but no one's sure if that's still a thing that's happening.