Thor's good friend and companion, Lady Sif is a powerful warrior in her own right. Born into privilege, but trained to fight with the skill and 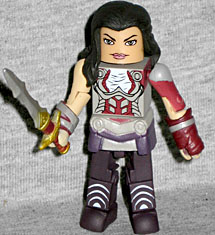 power of any Asgardian warrior, Lady Sif stands by Thor's side in his battle to save both Asgard and Earth.

In the original myths, Sif was Thor's wife - in Marvel continuity, she's his love interest, but has to compete with Jane Foster. Of course, she also has black hair, while the mythological version is famously blonde, so there you go. The Minimate does a really smooth job of creating Sif's asymmetrical costume - the only new pieces are her gloves and skirt, and the rest is accomplished with paint. They planned to mold a new upper arm for her, but that idea got dropped. The likeness is a very good representation of Jaimie Alexander, and her new hair piece hangs over one shoulder. She's armed with a fancy Asgardian sword, so she's definitely ready for battle.

While still young, Thor and his friends, The Warriors Three, 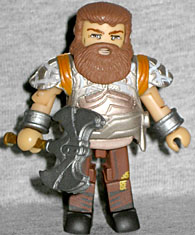 have had many adventures and battles protecting Asgard. Volstagg is the largest and most boisterous of Thor's friends and is the heart of the Warriors Three.

A fat guy with a beard and an axe? Who knew Gimli was in Thor! Volstagg the Voluminous is played by Ray Stevenson, who also played Frank Castle - guess it's time to put him on The List! There isn't much to say about the likeness, since most of it is hidden behind that epic beard. He has a highly ornate chest cap, which bulges in front to suggest his girth, and he has a bit of paint on his legs. His weapon is a large double-bladed axe. Art Asylum has control art for the remaining two thirds of the Warriors Three, but so far no word on when they'll be out.

Something interesting to note about these Thor figures is what seems to be a change in the way Minimates are made: rather than having the copyright info tampographed on the back of the legs, like we've seen so many times before, it's now a raised part of the sculpt. On the plus side, no more blatant white letters on dark colors, which will be nice.